Luxury Cars over the Horizon 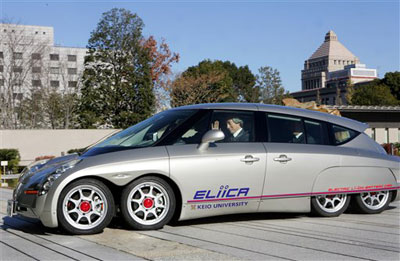 To engineer a luxury car of the future, today's designers must first conceive of what luxury will mean in the year 2030. Will it just be about the car's curb appeal? Will drivers -- and passengers -- expect not only to be comfortable in their luxury cars but also pampered? If so, then perhaps future luxury will be delivered through tranquility, speed and control.

Tranquility certainly appears to be on the minds of Barcelona, Spain-based car designers Ficosa International. In 2005, Ficosa re-imagined a car's interior in the Senzai. The designers took their cues from nature, including elements like water and wood and even integrating the perception of wind within the car's cabin. Their ideas were based around Japanese Zen gardens.

An illuminated stream, enclosed in glass, falls from the top of the Senzai's dashboard to the rear floorboards, separating the driver from the passenger. On either side of the stream, the floor consists of Japanese-inspired sand gardens, which extend a warm glow to the interior cabin [source: Car Design News]. Raked sand lends a windswept impression to the interior.

Those of us who expect to shell out $320,000 for a luxury car by 2030 should keep an eye on Keio University in Japan. That was the going rate for the Eliica, an 8-wheel electric car designed by Keio engineers when it debuted as a prototype in 2005 [source: Gizmag]. Each of the Eliica's wheels has its own 100-horsepower electric motor, making the car capable of high speeds and smooth handling [source: Auto Express]. In fact, although the Eliica lacks an engine and transmission, the electric motors driving the car can produce speeds of up to 230 miles per hour [source: Gizmodo].

Ultimately, the idea of luxury comes down to the car buyer's ability to get exactly what he or she wants. Automaker BMW is looking to have that market cornered with its GINA (Geometry and Functions in 'N' Adaptations) concept car. This luxury convertible concept car only loosely resembles an automobile. It has an engine (and a high-powered one at that), wheels, steering and the like. But it's also a vast departure from traditional sports cars. The exterior is made from a sleek, durable fabric that covers a lightweight aluminum frame. This fabric is water-resistant and also resists cold and heat, so to the car's occupants, it feels like driving in a car with a traditional composite or metal body [source: Motor Trend].

But the fabric allows for the GINA's most interesting feature: the ability to reconfigure the car's body. So, for example, if the driver wants the spoiler up, he or she simply presses a button and the spoiler swells beneath the car's fabric skin [source: Car and Driver].

Even with concept cars that have been prototyped and put on display, the future of luxury still remains decidedly difficult to pin down. But if any of the ideas being batted around the automotive design industry today make it into production, you may want to start saving up for your 2030 luxury car right now.

For more information on auto technology and other related topics, visit the next page.