How an Electronic Sun Visor Works 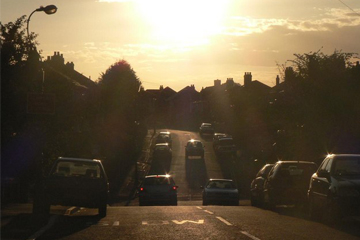 There's simply no sun visor that can extend low enough to shield the sun's rays from your eyes at sunrise and sunset. But wouldn't it be nice if you could somehow safely reduce the glare?
Courtesy of Chris Downer

In theory, some of the technologies used for smart windows would be applicable. Photochromatic glass, which darkens when exposed to sunlight, seems like it would be a good way to make windshields more effective. And it's true that photochromatic technology and other similar smart glass products are already being used in cars. But auto manufacturers seem hesitant to employ anything more complicated -- after all, the main purpose of a windshield is safety, and the strength and shatter-resistant properties of the glass can't be compromised.

However, a solution known as suspended particle devices could be adapted for use in sun visors. Suspended particle devices function like a valve that lets light pass through. Millions of these particles float in a material between two panes of glass (or plastic, in some cases). A control module allows the user to decide how much light to allow to pass through. If full light is desired, the particles are arranged in rows so the sun's rays have a pathway through. To block light, the particles are scattered.

Some companies have tried to put similar ideas into effect. One such product that was once in development was a clear electronic panel that could descend from the car's regular sun visor. In addition to blocking the sun at the brightest times of day, it was also designed to be used at night to reduce headlight glare from surrounding traffic. YES Invent, a development firm based in Israel, claims their visor monitors the driver's eyes to figure out how much glare reduction is necessary and then automatically adjusts accordingly. The price was projected to be less than $300, and YES Invent hoped it would be widely adopted by automotive manufacturers ... but it hasn't happened yet.

Back in 2007, Popular Mechanics and some blogs reported that Volkswagen was working on another system, kind of a combination of the two aforementioned concepts. It used the same sunlight sensors and driver's-eye sensors as the YES Invent's anti-glare visor, but the components were actually embedded into the windshield itself to offer protection in the areas that a regular sun visor simply can't block. It produced a dark spot in the glass that reacted swiftly to changing light and could even move when the car turned. It's reasonable to assume that the system, if ever completed, would have ended up in the Volkswagen group's more upscale models (like Audi, for example) but so far, the electronic matrix sun visor (as it was called back then) has yet to be seen.

As best as I could tell, it seems like auto researchers have decided sun glare just isn't that much of a problem anymore. Projects in development appear to have been abandoned, and sun visors don't seem much more advanced than they did the last time I drove a new car. The sun's still there, so it's hard to figure out why auto manufacturers think drivers no longer need glare protection. It's probably worth mentioning that anti-glare features on tablets and e-readers is rather impressive now, though -- we certainly don't recommend reading in traffic, but it would probably be easier on the eyes.