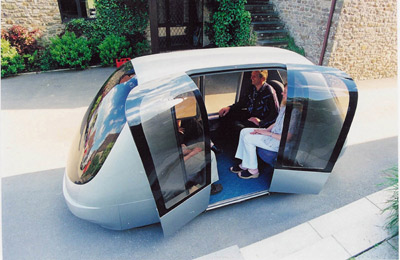 Urban Light Transport is a revolutionary driverless taxicab. It's yet to be seen whether the masses will place trust in driverless cars.
ATS Ltd/BWP Media/Getty Images

Google is not the only game in town when it comes to semi-autonomous cars. There are several in the pipeline for the next decade or so:

Remember those commercials in the mid-2000s where the big black sedan parked between two towers of champagne glasses? That was the first car to have an automatic parking system, the 2007 Lexus LS460. But even in a big car with advanced technology, the system was deemed too cumbersome, and Lexus no longer offered it after the 2012 model.

This is the kind of article that feels like the information and technology are moving faster than my fingers can type. Even though I'm on top of automotive technology -- or I fancy myself to be, anyway -- I was surprised to learn that a BMW available about five minutes from now already drives itself at low speeds. Granted, it can't fly solo, but it's close. The fact that the competition is so seemingly fierce already made me wonder why we care about self-driving cars. I came to the conclusion that it's not because we're too lazy to drive the things ourselves; it's because we're too busy. There are a million things we'd rather be doing than driving a car, like watching a movie. Or taking pictures of the landscape as we pass. Or sleeping. Or calling our moms. Driving isn't the key to freedom that it used to be. Bandwidth is.