The future is now! 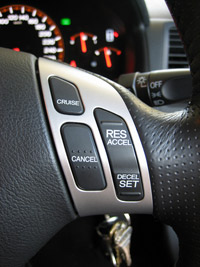 ­So, we moved from "Christine," a driverless car that actively wanted to kill you, to the cars of the 1980s and 1990s that want to keep you safe. In the 21st century, where science fiction is everyday life, pre-safe systems are more common, and not just in quarter-million-dollar cars upholstered in rich Corinthian leather. This technology is available even in everyday family cars; the kind upholstered in whatever best hides sippy-cup slip-ups. The systems differ depending on the car, but what all have in common is that they can anticipate crashes and prepare the car to keep the occupants safe.

Say you come around a corner only to find a garbage truck stopped in your lane. In a car with a pre-safe system, an alarm might go off as you near the truck's odoriferous maw. While you yell the swear words of your choice but still do nothing useful, the pre-safe system might start priming the brakes so that just touching the pedal will apply their full force -- if you ever find the presence of mind to stomp the brake pedal, that is. While all that's going on, the car will reduce engine power, which will slow the car and reduce the severity of the crash, if there is one to come. At this point, some of the high-end systems are able to stop the car completely, all by themselves, usually under a certain speed. Finally, if the system detects that a crash can't be avoided, it'll prepare the airbags for deployment and tighten all of the seat belts. What's really amazing is that it will do all that in less time than it takes the driver to simply slam on the brakes. It's only a matter of time before the car sighs and expresses its disappointment with your driving ineptitude.

You know what else makes our cars sad for the puny humans who drive them? Our terrible parking abilities, especially parallel parking. Several manufacturers offer automatic parking systems on everything from SUVs to compact cars and hybrids. The systems use sensors all around the car to guide it into a parallel parking space -- no human input required. Before it can work, the driver has to find a parking space, position the car next to it, and use the navigation screen to tell the car where it should go. Still, the self-parking system is a big achievement in driverless car technology. With it, the car behaves like a driver might -- reading the area around it, reacting accordingly and going safely from point A to point B. While it's not the same as sitting back and relaxing while your car drives you home for the night, it's the first step in that direction.

The Audi RS7 Sportback SUV goes one step further in the automatic parking wars -- it parks itself while you stand on the curb and wait. As demonstrated at the 2013 International Consumer Electronics Show, the driver positions the car at the empty space and then commands the vehicle to park itself using a smartphone app. When you're ready to leave, you can command it to leave the parking space and pull up to where you're waiting.