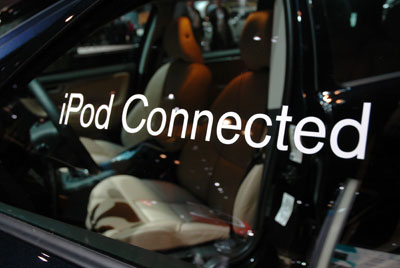 Driving can be a lot simpler if you know where you're going. Like K.I.T.T., digital cars have navigation systems -- and these onboard guides are about to get even more sophisticated. Next-generation onboard navigational systems will have 3-D overviews of your route and destination. Soon, you'll be able to get real-time traffic reports from other drivers; ultimately, navigation systems may become a wireless network of cars sending information to one another [source: CNet]. As this information database is expanded and updated in real time, your navigation system will even be able to guide you to the gas station with the cheapest fuel.

These cars aren't just guiding drivers over long stretches of road. Another high-tech feature, auto valet, uses satellite images to guide you into parking spaces -- even tight parallel spots. Once you enable the electric power steering, just sit back: The car uses sensors to detect objects around it and powers the car to pull smoothly into your chosen space. No hands, literally [source: New York Times].

Of course, the digital car isn't just about navigation and a parallel parking help. While BMW was the first auto manufacturer to offer an integrated iPod connection in its cars in 2004, 40 percent of today's cars have docks [source: CNN Money]. And it's more than just tunes entertaining drivers -- and passengers. DVD players are common in minivans and SUVs, and some have inputs for video game consoles. But what about surfing the Web from anywhere? That's on the way.

Digital cars just over the horizon will feature mobile wireless internet service providers (ISPs) that can keep up at highway speeds, rather than just allowing you connect in hot spots. Automakers may soon add the ISPs to their onboard hard drives [source: TechNewsWorld]. With a mobile ISP, passengers could play World of Warcraft online with remote friends during the drive to Disney World.

The addition of integrated entertainment gadgets in passenger cars has raised some concerns about road safety. After all, if you can access your e-mail while watching a DVD and answering a call on your cell phone, all the while cruising along at 70 mph, how much effort are you putting toward actually driving? According to the National Highway Traffic Safety Administration, 80 percent of car crashes are caused by distracted drivers [source: New York Times]. Automakers' challenge is to figure out how to design features in digital cars that allow drivers to use these specialized features with minimal distraction.

Microsoft has proposed the Sync, a multimedia hub designed for cars. The Sync uses wireless technology for drivers to connect to two of the biggest distractions -- mobile mp3 devices and cell phones -- with simple voice commands [source: Ford]. And Ford offers a pickup truck that comes equipped with an in-dash monitor, full-size keyboard and Internet access. But there's a safety precaution: The computer only works when the truck's transmission is in park [source: New York Times].