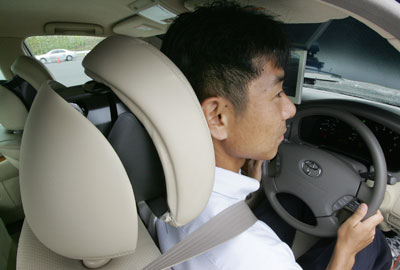 In 2006 in Japan, Toyota demonstrated some of its precrash features, including head rests that adjust to prevent whiplash.
Toru Yamanaka/Getty Images

So what makes an intelligent car intelligent? There's the Smart Car, but that name refers to the buyer's decision to choose a fuel-efficient, low-emissions car rather than any digital aspect. To create a truly intelligent car, auto engineers have focused on ways to manufacture automobiles that use computer-based solutions as answers to problems that have been around since cars were invented -- like danger and boredom. The high-tech gadgetry in today's most digitized cars centers around two main categories: safety and entertainment.

Up first is safety. The development of fast cars has outpaced safety technology. It wasn't until 1966 that federal law required seatbelts to be installed on all new vehicles manufactured in the United States [source: Prevention Institute]. Airbags weren't introduced as a standard feature on most cars until the 1990s [source: Esurance]. Yet, engine design has produced faster, more powerful vehicles at a breakneck pace.

With digital cars, the goal is to not only protect a car's occupants in an accident -- like seatbelts and airbags do -- but also to prevent collisions altogether. Some luxury cars use wireless, infrared, and camera technology that keeps an eye on the cars around you while you drive. Called precollision systems, these outfits detect rapidly approaching objects ahead, such as deer or stopped cars, via cameras, lasers or infrared sensors. Warning lights and alarms alert you to an impending collision. The car's onboard computer adjusts the brakes to provide intense stopping power with just a little pressure applied by your foot. Seatbelts may automatically tighten, headrests move forward to protect against whiplash and seats adjust to an upright position.

In the highest-end precollision systems -- like the one in the Lexus LS -- cameras look for traffic up ahead, and another camera mounted in the steering wheel analyzes your face for attentiveness to oncoming obstacles. If the integrated computer determines that a collision may occur before you have a chance to respond, the car can actually brake for you [source: Consumer Reports].

Knowing what you're about to collide with before you even see it is definitely digital. The use of infrared night vision technology was first introduced in cars onboard the 2000 Cadillac DeVille. The night vision looked beyond the headlights, displaying images on a dashboard screen for the driver. The equipment extended reaction time for night driving at 60 miles per hour from 3.5 seconds to a full 15 seconds [source: New York Times­].

Next-generation infrared sensors in current Lexus models detect heat hundreds of feet ahead of the car-- be it a person, deer or another car -- and digitally display the images on the windshield [source: Consumer Reports].

But some digital cars are designed to do more than get you home safely -- they're also keeping drivers entertained and connected. Read about wireless Internet on the open road on the next page.