by Matt Cunningham
Prev NEXT
7

The car's dealer was the victim of a natural disaster. 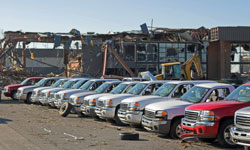 If a dealership is damaged by a natural disaster, the owner may write off the damaged cars, which may earn salvage or rebuilt titles.
Hemera/Thinkstock

This reason for a salvage title is very similar to the previous one, and should prompt you to inspect the car for flood or water damage. But in certain situations, cars that were on a dealer's lot during a natural disaster may be given salvage titles, even if they weren't damaged to the point of salvage.

Imagine a scenario where a car dealer has a lot on a hillside. A flood tears through the area, submerging the lower half of the lot and ruining the cars parked there. When the insurance inspector arrives to evaluate the damage, she sees a lot filled with hundreds of cars: The half in the lower lot sustained various amounts of damage, while the ones at the top of the hill were untouched by the flood. Depending on the number of vehicles involved, she may decide to write off the entire lot, rather than incurring the cost to inspect every car, repair the slightly damaged ones and total the ones damaged worst by the flood [source: Lease Guide].

The undamaged and less-damaged cars caught in these dealer stock write-offs can present deals for buyers willing to do research into what happened to cause the write-off. Buying a car involved in one of these write-offs, repairing it and getting it a rebuilt title could possibly be less expensive than buying a model with a clear title.

But dealer stock write-offs are not free tickets to cheap cars. Insurance may be higher on cars with rebuilt titles, and it could take a great deal of research to determine what happened to the dealer's lot, and if the car in question was truly an undamaged car caught up in a broad-brush insurance decision.