by Matt Cunningham
Prev NEXT
9

The car was stolen and recovered. 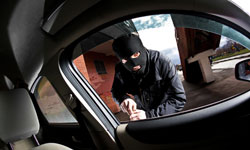 If a stolen car isn't recovered right away and is replaced by the insurance company, the original car may receive a salvage title when it's found.
iStockphoto/Thinkstock

According to 2010 statistics, a car is stolen in the U.S. every 33 seconds [source: Neff]. Insurers often act quickly to help their clients get back on the road after a theft, which leads to the second reason the car of your dreams may have a salvage title: It was recovered after being stolen.

Not every car that gets stolen ends up with a salvage title. If the car is recovered quickly, the police may simply return it to the owner. In cases where the car is not recovered for weeks or months, the insurance company may have already replaced it for the owner. In essence, the insurance company writes off the original car as a total loss. The car, when recovered, is then titled as if it had been written off due to a totaling accident.

A car given a salvage title for a non-damage reason can often have the title changed to a rebuilt title, a designation that then allows the owner to operate it legally on the street. Often, this simply requires a state inspection for safety, although the details of the inspection and re-titling process vary from state to state [source: Salvage Title Cars].

If you're interested in a car that has a salvage title, and the owner claims it was stolen and recovered, find out why the car hasn't been re-titled yet. The owner should have done this before offering the car for sale as a matter of good business; failure to do it may be a sign that there's something else wrong with the car.