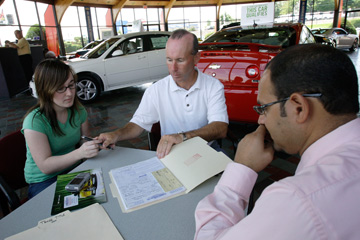 A customer signs the purchase contract in front of a salesman at Commonwealth Motors in Lawrence, Mass.
AP Photo/Charles Krupa

So, let's say that you've made the decision to ditch the clunker you're driving and get a new (or new to you) vehicle. You've done the math and used the online payment calculators, and you know what you can afford. You've got your down payment ready, and you know how to haggle the price down to a number that won't make your wallet burst into flames.

Oh, but wait! What's this extra couple of thousand dollars on the final price? In addition to paying for tags and registration, you'll also have to pay taxes on that new car. And depending on the state and local tax rates where you live, it can add a noticeable amount to your purchase price. The taxes can often be folded into your monthly payment, but you definitely don't want to be surprised by them when it's time to sign the paperwork.

Tax rates for vehicles can vary widely between states, and even by a few percentage points within a state. Sales tax usually starts with a state-wide figure that everyone pays. Some counties or municipalities add their own sales tax to the state tax, making it a little higher in some areas than others. There are also excise taxes on certain vehicles, like "gas guzzler" taxes for passenger cars that fall short of U.S. fuel economy standards. At times, the United States also imposes a "luxury tax" on cars with a higher than average purchase price.

Next, find out which taxes you can rely on paying at the time of purchase and how much these taxes might add to your final bill.

Whether you're buying a new car or a used car, or even leasing a car, you'll have to pay state sales tax. Nearly every state has a sales tax, ranging from under 3 percent to over 8 percent. The national average in the United States is 5.75 percent [source: TaxAdmin.org]. Of course, you'll want to find out your state's exact sales tax before you buy a car, but if you're simply looking for a ballpark figure, just use the average.

State sales tax is only the beginning, though. If you want to make sure every penny is accounted for when you purchase your vehicle, check out local sales tax rates. Some counties, cities, and even school districts levy taxes on purchases. The maximum total sales tax in some areas can reach double digits, adding more than 10 percent to the price of the vehicle [source: Edmunds.com].

In some states, if you have a vehicle to trade in at the dealership, you only pay sales tax on the difference between the final price of the new car and the trade-in value of the car you brought in. Let's say you buy a car in Georgia for $30,000. You've brought in a trade worth $10,000. Georgia only requires that you pay sales tax of (at most) 8 percent on the difference between the two, or $20,000. In this case, that's $1,600 in taxes.

Customer cash back and rebates are popular incentives these days for getting customers into the showroom, too. Some states figure your sales tax before the rebate is applied to the purchase price and others figure it after. For example, let's say you live in Connecticut and you want to buy a $20,000 car that offers $2,000 cash back. Since Connecticut figures its 6 percent sales tax before any rebates, you pay taxes on the full amount of $20,000, which would be $1,200. But if you live in Kentucky, where it figures its 6 percent sales tax after the rebate has been applied, you'd only pay tax on $18,000, which would be $1,080.

You might think you could sidestep sales taxes if you lease instead of buy your next car, right? Well, keep reading to find out how untrue that idea really is.

There are currently five states that do not have a sales tax: Alaska, Delaware, Montana, New Hampshire, and Oregon. Municipalities within these states can still levy taxes, however, so check locally to see if any sales taxes apply to your new car purchase. 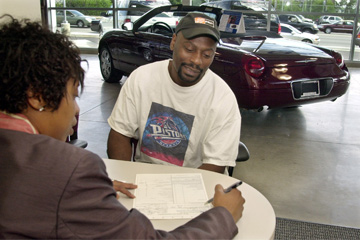 A sales representative explains a leasing contract to a customer at the Bob Maxey Ford dealership in Detroit.
AP Photo/Carlos Osorio

Leasing a car requires a slightly different budget from buying a car, with a first payment, a security deposit, a bank fee and more all due at signing. Unlike a standard car purchase, a lease requires a tax to be paid on the down payment (that is, if you're required to make one) and on monthly payments. Like a standard car purchase, these are sales taxes levied by the state and individual municipalities.

Lots of car commercials put monthly lease payments in big numbers at the end of the ad. Right underneath that enticingly low monthly number, however, is a dollar amount for cash due at signing. This includes all the fees associated with leasing a car and the taxes due on the down payment. Some states also tax the fees you pay at signing.

Each month, your payment will be taxed, too. While this sounds sneaky and terrible, it's not so bad. This way, you're only paying taxes on the car for as long as you lease it. A couple of states, like Illinois and Texas, do require you to pay the full amount of the sales tax up front. This tax can be rolled into the amount of the monthly lease payment [source: LeaseGuide.com].

The bottom line is this: Whether you're purchasing a new or used car or leasing a car for a specified time, state and local sales taxes will be applied. It's probably best to know what your local tax rate is and add it to your budget before you even begin shopping for a new car. That way, you're sure to minimize surprises on the day you drive your new car home.

For more information about automobile taxes and other related topics, follow the links on the next page.