Browse the article How long do transmissions last? 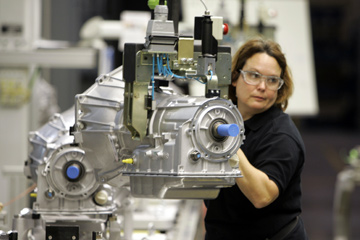 How long do transmissions last? It's a big question and one that's actually quite difficult to answer. Factors such as maintenance and build quality play a role. Lubrication and heat are also parts of the equation, as are circumstance and fate. It's a heady mix but it can be predicted to some extent, factoring out accidents, system failure, driver input and unlucky thrust washer metallurgy from the factory.

Take for instance the Aisin Warner AW4 transmission. This automatic transmission, found in Jeeps and Toyotas among others, holds something of a legendary status. The stories surrounding the longevity of this car part speak to the proverbial bullet-proof transmission, one that can run without lubrication and at high temperatures for unconscionable lengths of time. It can take punishment that would make a lesser transmission weep and seize. In short, all efforts to kill it will end in failure. It simply can't be stopped.

Are the stories true? Some are, others are merely akin to automotive urban legends and gear-head lore, a story to swap around a warm manifold in a cold garage in the winter. Like all transmissions, the AW4 is a mechanical contrivance compiled from hundreds of auto parts and subject to the same physical laws as all other transmissions. And when those laws are broken, the transmission suffers the consequences, as does the driver's wallet.

And the transmission itself is made up of more than gears, brakes and planetary carriers. It has pumps, complex hydraulic circuits, pressure switches and temperamental electronics. In fact, the daunting complexity of a transmission makes it a component that many seasoned mechanics are wary of tackling.

Ken Chamberlin has seen his fair share of failed transmissions. In his 15 years as a Chrysler auto technician, and several more before that as an independent mechanic, he has overhauled a wide variety of automatic and manual transmissions and delved into why they failed in the first place.

But the elusive "why" has never had a consistent cause. "There are a lot of variables," Chamberlin said. "How is it being used? Is it being maintained? What type of driving and what kind of fluid?" In his experience, one of the baselines for failure was the transmission itself. "This is a mass-produced component," Chamberlain said. "They're not identical and they're not perfect. I've seen one transmission last 10,000 miles, and an identical transmission last for 200,000 miles. You just can't say."

While the factory and fate play a role, Chamberlin said there was always a cause-and-effect relationship leading to failure, which is usually dependent upon a few factors.

From a failure perspective, fluid is one of the key factors. Modern transmissions, despite their status as mass manufactured items, are built to close tolerances and engineered for very specific functions. Part of that engineering includes working with a specific type of fluid that acts in concert with the other components. "Not every fluid is the same," Chamberlin said, adding that some parts and service departments, as well as independent shops, believe it is.

Each type and grade of fluid -- and there are more than 50 on the market -- offers a different amount of slip. Within the automatic transmission world, clutches use the fluid slipperiness during clutch apply and release phases. A change in fluid means a change in shift feel and slip, and this often translates into more or less heat being generated, faster wear on parts or degradation of clutch material.

The reaction is much the same in manual transmissions, where the gears reside in an oil bath. The fluid transfers heat, allows for the smooth transition of gears and prevents wear. Change the fluid and the interaction between the fluid and the transmission components will change as well, leading to possible damage and failure.

Fluid also plays a critical role in heat and pressure. Chamberlin said there was a direct correlation between heat and transmission longevity. The hotter a transmission runs, the shorter its lifespan. For example, plow trucks used during New England winters are notorious for having short transmission lives. The transmission goes through thousands of hours of heavy use and generates significant heat during that time. As a result, the fluid breaks down, components fail and the car part longevity takes a nose dive.

Automatic transmissions use pressure to apply and release clutches, or essentially shift gears. This pressure is affected by a number of variables, but the baseline numbers are determined in large part by the fluid and its relative condition, which is affected by heat. Hot, older fluid can decrease (or increase) the pressures within the transmission beyond engineered tolerances. When this happens components begin to fail and soon the driver is left with an expensive repair bill.

The best way to keep a transmission alive is proper maintenance.

The primary differences between the two are in how the transmissions are shifted and how that shift is accomplished.

Automatic transmissions shift automatically, as the name implies, with the aid of a complex hydraulic circuit that uses fluid and pressure to apply and release clutches based on mechanical, hydraulic and electronic inputs. Manual transmissions accomplish the same goal, but the gears are changed manually using shift forks and synchros to smooth out the transitions. The clutch, which is engaged and disengaged to move through the gears, is also a manual input. Regardless of the type, maintenance plays a key role in transmission longevity.

Most experts feel severe use warrants a recommended 15,000-mile (24,140-kilometer) fluid and filter change interval. Severe use is defined as more than 50 percent use in heavy city traffic with ambient temperatures above 90 degrees Fahrenheit (32.2 degrees Celsius) Remember the correlation between heat and lifespan? Experts also recommend changing the fluid whenever there is an indication of oxidization or contamination. Some transmissions, including a few models used by General Motors (GM), use an aluminum valve body. This soft metal is less tolerant of dirt and abrasives and GM recommends more frequent fluid changes to prolong the life of this auto part.

Changing transmission fluid is not as simple as changing engine oil and should be handled by a service technician or someone with a thorough understanding of transmissions. Generally, the car is lifted on a hoist, the pan is dropped and the old fluid pours out. This fluid and the pan are inspected for contaminants, such as fiber from clutch discs or any other indication of a larger issue that may be appearing. After a routine check of the exposed components the filter is changed, the pan is replaced and the fluid added to the proper level.

Manual transmission fluid change is usually simpler. Manual transmissions are usually outfitted with drain and fill plugs. The car is lifted, the oil drained, and then refilled with the proper grade specified by the manufacturer. If an owner decides to tackle this operation on his or her own, one thing to remember is to make sure the fill plug can be removed and the fill tube is clear before draining.

While periodic fluid changes are ideal, checking the fluid level and condition on a regular basis is a good idea as well. Most automatic transmissions have a dipstick similar to the engine oil dipstick. However, unlike engine oil, the car must be running to check the level. The vehicle manual will also specify if the car should be in park or neutral, and what temperature the transmission should be -- fluids expand with temperature and checking a cold transmission will often provide a false reading. When the dipstick is out, smell the fluid and note if it smells burned (a symptom of overheating), or like any other fluid (gas, coolant or motor oil), which may be a symptom of a leak in the system or contamination. Also, wipe some of the fluid onto a piece of white paper or cloth and check the color against a fresh fluid sample. Too much variation in color could mean contamination or degradation of the fluid.

Manual transmissions can be checked by opening the filler plug. The level should be just below this hole. Dip a cotton swab in, pull some fluid out, and smell it to check the condition of the oil just as you would on an automatic transmission.

Some newer transmissions, including the Chrysler NAG1, don't offer dipsticks for routine checks. Instead a technician has a special dipstick used in conjunction with a chart and an electronic scan of the transmission temperature to determine the proper level. Other manufacturers, including GM, have sealed transmissions that are only serviceable by trained technicians with the correct tools.

While maintenance is key to auto part longevity, being aware of any bangs, whines or groans from the transmission, as well as smells, will help head off any problems at an early stage.

An automatic transmission is essentially a large and complex hydraulic circuit. Each design creates a different circuit, but each works in what amounts to the same fashion. Any hydraulic system has the same basic components:

The primary physical law behind the automatic transmission was defined by the French scientist Blaise Pascal more than 300 years ago. He discovered liquids could readily transfer force because they were non-compressible. More importantly, force moving via a liquid could be transferred in a more flexible manner. Pascal also found the force applied to a liquid, thereby creating pressure, could be modified to create a mechanical advantage. This meant small amounts of force within a hydraulic circuit could be translated into large amounts of force. This can be seen in things like hydraulic jacks where one human being can raise several tons by applying hydraulic forces. It can also be seen in car brakes where a person's foot can apply enough force to stop a one-ton car moving at highway speeds. It's all hydraulic force, and it's all due to fluid. 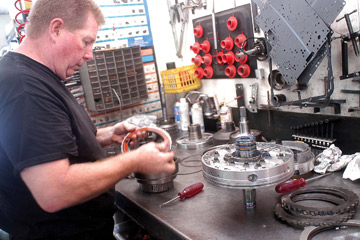 When a transmission stops working, the most likely cause is most often deep inside the component, and sometimes the most cost effective way to handle the issue is to replace it. But removing and replacing a transmission is tricky.

Remember, transmissions don't stand alone. They're an integral part of the car and a wide knowledge of automobiles as a whole, as well as specific knowledge of the techniques required to remove and replace a transmission, is necessary. The following list should give you an idea of just some of the steps that a technician will go through to remove a front-wheel-drive automatic transmission:

Depending on the year, make and model of the vehicle you're working on, the actual list of things to do can be much longer and more involved. It also doesn't take into account rusty bolts, corroded fittings and the fact that transmissions can weigh hundreds of pounds and are difficult to maneuver in confined spaces -- like the engine compartment. But once the transmission is out, the real work begins. If the transmission is being replaced, the new transmission, either reconditioned or new, must be checked out. The front pump and torque converter also need to be inspected and installed, and all sensors, solenoids, valve body and filters changed out, replaced and checked.

Depending on whether a new transmission is installed or an older one is overhauled, the process can take anywhere from five to more than 15 hours of labor time. And the cost can range from about $1,500 for a rebuilt transmission to more than $6,000 for a factory-new unit. Labor rates typically range from $80 to more than $100 per labor hour for an experienced and certified technician.

For more about transmissions and other auto part information, follow the links on the next page.