What does the reptilian brain have to do with car manufacturing? 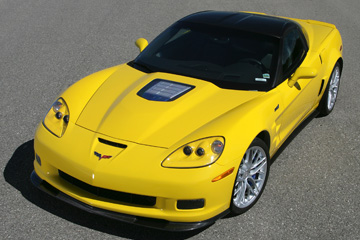 A lot of factors go into our decisions to purchase a car: affordability, reliability, availability and several others are likely among the top few for many consumers. But there's no denying that our cars are also a statement about our personality. A sensible four-door sedan sends a different message than a minivan, and a sexy little sports car sends a different message than an SUV.

But that sports car and SUV have more in common than meets the eye: Both of them appeal to the reptilian part of our brains. While we don't have actual lizards living in our heads, the reptilian brain is the deepest part of our brain, or the "gut level." And according to Dr. G. Clotaire Rapaille, the founder of Archetype Discoveries Worldwide (a firm that studies how shoppers choose new cars),  this part of our brain controls survival functions, including hunger, breathing, and fight-or-flight responses. The reptilian brain likes "power, big, sex, survival, and reproduction." [source: Carwinism.com]

Rapaille says we have three basic levels to our brain:

What do these three levels have to do with car manufacturing? By appealing to that gut level of our brains, which functions without much input from the emotional or rational parts of our brains, automakers can get us to buy bigger, faster, cooler -- and yes, more expensive -- vehicles.

In the case of SUVs, for example, our reptilian brains like the fact that the driver sits higher, enabling him or her to see farther and giving a feeling of safety. It's only a feeling, though -- our rational brains know that higher vehicles have a greater tendency to roll over than lower ones.

Keep reading to find out how manufacturers were able to make the reptilian brain override the cortex and make SUVs wildly popular in the 1990s and early 2000s. 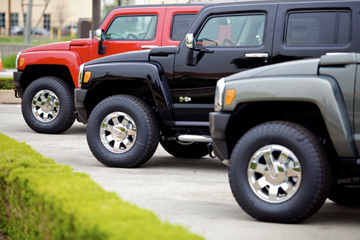 Sure, it's big enough -- but is the owner ever going to drive it off-road?
AP Photo/Damian Dovarganes

While the idea of the reptilian brain has been around for years, a new science has popped up to support the idea of a "gut-level" car purchase. It's called neuromarketing. Researchers are using high-tech science and technology to discover exactly what our brains respond to in advertising. Machines like fMRIs take images of a subject's brain while he or she looks at automobile ads. When different centers of the brain are engaged by the ads, these specific areas change color on the scan. Researchers also track eye movement and heart rate to see what grabs people's attention.

By appealing to the reptilian brain, car manufacturers are hoping to override the little voice in our heads that asks, "Will I ever take this SUV off-road?" The reptilian brain doesn't care about the actual utility part of the sport-utility vehicle; it simply likes that the vehicle -- and therefore the driver -- appear to be able to take on anything. Of course, according to a "60 Minutes" report from 2003 at the height of SUV mania in the United States, only 5 percent of SUV drivers ever actually drove their vehicle off-road [source: Leung].

The reptilian brain cares about two things -- sex and survival. When you let it pick a car, it'll pick one that conveys one of these things, and preferably both. For instance, while the SUV gives the impression of being bigger, badder and more "menacing," according to the "60 Minutes" report, Rapaille points out that best-selling American sports cars, like the Ford Mustang, Thunderbird and the Chevrolet Corvette, have serious sex appeal.

Up next: The fate of the SUV and the reptilian brain that loves it. 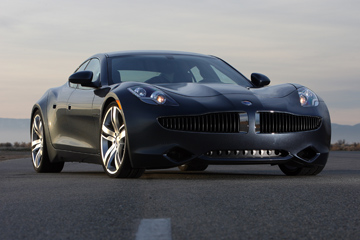 There's more to our brains than the reptilian, of course. Rapaille reminds us that we also have the intellectual cortex and the emotional limbic brains in addition to the gut-level reptile brain. After years of appealing successfully to our base-level brains, car manufacturers are beginning to catch up with our cortex.

Sales of full-sized, four-wheel-drive SUVs were already declining when gasoline prices hit record highs during the summer of 2008. And apparently that was enough of a change for the number-loving cortex to take over for the reptilian brain when it came to car shopping; sales of gas-sipping compacts and hybrids got a big boost.

As the world economy took a hit in 2008 and 2009, consumers relied even more on the cortex when purchasing vehicles. People assessed their needs and their bank accounts and were less likely to be swayed by the perception of power and sex portrayed by expensive, gas-guzzling SUVs and fast cars. Safety features, affordability and fuel consumption became more important to car shoppers.

However, don't count the reptilian brain out of car manufacturing just yet. Sports cars that use alternative fuels, like the Tesla Roadster and the Fisker Karma, actually appeal to all three parts of our car-buying brains. Now, that's an interesting thought, isn't it? Maybe you should consider which part of your brain is likely to win the next time you decide to purchase a new car.

For more information about the reptilian brain and other related topics, follow the links on the next page.

Windows down or A/C on -- which is more fuel-efficient?
Do You Have to 'Break In' a New Car?
Regulation Works: As Motorcycle Helmet Laws Ease, Injuries Increase