Has Prius engineering changed over the years? 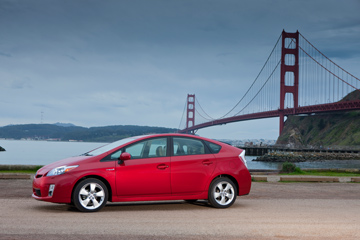 The Toyota Prius first emerged as a concept car in the mid-1990s after the company spent two decades experimenting with cars operated by electricity and gasoline power together [source: Taylor]. The production version went on sale in Japan in 1997 and was the world's first mass-produced hybrid car. As a hybrid, it used a battery and an electric motor coupled with a small gasoline engine to achieve low emissions and strong fuel economy -- in fact, the first-generation Prius managed about 66 miles per gallon (28.1 kilometers per liter) [source: ToyoLand]. The Prius went on sale in the United States in 2000 as a 2001 model, and with some added horsepower it was rated at 52 miles per gallon (22.1 kilometers per liter) in the city and 45 miles per gallon (19.1 kilometers per liter) on the highway. This Prius, however, never saw the strong sales of its successors, perhaps because of low gas prices at the time and its small body -- the original Prius design was a subcompact not much bigger than a Toyota Echo sedan.

Recently, Toyota came out with an all-new Prius as a 2010 model, but you may not be able to tell at first glance. Though it looks very similar to the second-generation car, the third-generation Prius is wider and shorter. It uses a 1.8-liter four-cylinder engine instead of the car's traditional 1.5-liter engine. Using new automotive manufacturing technology, the Prius also includes several high-tech new features, including Lane Keep Assist, which warns the driver if he or she leaves the driving lane unexpectedly, and Intelligent Parking Assist, which essentially parallel parks the car for you. All you have to do is control the speed using the brake [source: Blanco]. To make the car even greener, some models even have solar panels integrated into the roof that harness sunlight to help run the air conditioning. Under the EPA's revised fuel economy standards, the third-generation Prius gets 49 city miles per gallon (20.8 kilometers per liter) and 50 highway miles per gallon (21.3 kilometers per liter) [source: Fueleconomy.gov].

To learn more about the Toyota Prius, engineering changes and other related topics, follow the links on the next page.