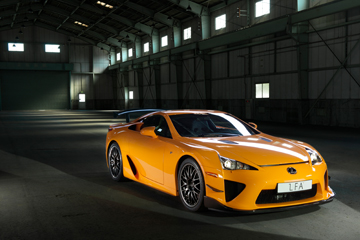 From Formula One race cars to ultra-expensive supercars on the street, keeping weight down is essential for high performance. The lighter a car is, the faster it can move. That's why automakers utilize a wide array of high-tech, lightweight materials to create the bodies for their cars. Carbon fiber is one of the lightest materials currently in use.

In a nutshell, carbon fiber is made of very thin strands of carbon woven together into a sheet. The result is a material that is five times stronger than steel and yet it weighs two-thirds less. Many high performance vehicles use carbon fiber in one form or another, like F1 racecars, BMW's M cars and the Lexus LFA supercar. Carbon fiber is also used on aircraft, consumer products and even in civil engineering applications.

But carbon fiber has its drawbacks. Mainly, it's very expensive and time consuming to manufacture. For example, Toyota had to build a unique, aerospace-grade carbon fiber loom -- one of only two in the world -- just to build the chassis for the Lexus LFA. The stuff is not exactly easy to come by [source: Lexus].

This prompts the question: What's better than carbon fiber? One of the world's most prestigious sports car companies says the answer is aluminum.

Although companies like BMW, Porsche, McLaren and even Chevrolet have made at least some level of commitment to carbon fiber, Ferrari claims that lightweight aluminum is superior because it can be mass-produced at a greater rate than carbon fiber.

Unlike older Ferraris that featured carbon fiber like the Enzo, the company's latest 458 Italia makes extensive use of aluminum. Ferrari claims aluminum does not have any additional weight penalty over carbon fiber, either. They say the material is also much cheaper to repair if it's damaged in a collision. We should probably mention here that most new cars are still made of steel [source: Popular Mechanics]. So while carbon fiber may not quite yet be old news, it does have some competition. Many manufacturers are experimenting with bodies made of magnesium or plastic polymers. Other brand new and exotic materials are on the horizon for automotive applications as well.

In fact, in 2011 researchers in California unveiled a new material comprised of a "micro lattice" of interconnected hollow tubes, each measuring 1,000 times thinner than a human hair and about 100 times lighter than Styrofoam [source: HRL]. The result is the world's lightest material -- and perhaps we'll see something similar on the lightweight supercars of the future?