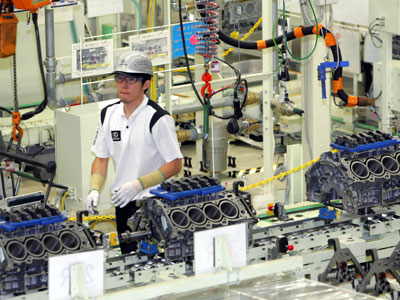 One of the problems that car companies have constantly run up against in automotive production lines is how to keep the workers happy and interested in the products they build. Alienation is a common problem for production line workers because the tasks they perform can often be boring and extremely repetitive. Some may also not feel like they have any ownership or stake in the product they're building.

Toyota's method of production and assembly helps address that problem. Toyota factories in Japan are designed to be happy places, where automated delivery cars play cheerful songs as they go by. If a worker spots a problem, he or she is encouraged to stop the production line and fix it -- even though stopping and starting the line is very expensive. Also, as a group, employees exercise together and workers are continually invested in and given a stake in the company. After seeing Toyota's success, other car makers have started using some of the same principles.

Some car companies have never really applied the production line process to their product -- their cars remain entirely hand-crafted. High priced cars from automakers like Aston Martin and Ferrari are hand-built to their customer's specifications. In some cases, car makers will even custom mold the driver's seat to the buyer's shape.

Other cars are built using a combination of these two techniques. The Chevrolet Corvette, for example, has a hand-built engine, but other parts of the car are assembled on the production line.

For more information about production lines and other related topics, follow the links below.