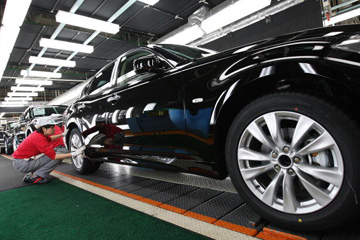 When you drive a brand new car, one of the first things you notice is how little there is to notice. The doors shut tightly, the engine hums, and there aren't any rattles or clanks. If all has gone well in the auto manufacturing process, a new car will be quiet and secure, thanks to the fine-tuning performed at the factory.

There are several ways to fine-tune a vehicle during automotive manufacturing. Some companies give the car a thorough tuning at the end of the line before the car ships to the dealer, while others incorporate that kind of attention to detail into every step of their assembly. Still, some auto builders build so few cars, such as luxury or high-performance cars, that the final fine-tuning process is a significant part of the time it takes to make the car. Aston Martin, for example, uses what it calls a "rectification area" at the end of the building process. Even though their cars are built completely by hand, the vehicles are still given a once-over at the end.

Toyota, on the other hand, builds quality control and fine-tuning into its manufacturing process. As one of the top-producing automotive manufacturers in the world, the company builds far more cars than Aston Martin. Toyota incorporates its fine-tuning throughout the car-manufacturing process; however, it still performs some final inspections, including the testing of braking and water seals, before giving a vehicle the OK.

As one of the most luxurious auto builders on the planet, Bentley uses some of the most advanced fine-tuning technology alongside handcrafting techniques. For example, every piece of glass is polished with optical-grade pumice, and four-axis measuring machines check 2,500 measuring points on each finished car.

Why do these companies go to all this trouble? Read on to find out what makes this attention to detail worth it.

For companies like Aston Martin and Bentley, fine-tuning expensive, high-performance automobiles is a no-brainer. But why would a mass-market manufacturer, such as Toyota or Nissan, go to all the trouble? If one car out of millions made it through with a little rattle, that would be OK, right?

Not at all, according to Barbara McDaniel, manager of external affairs at Toyota. McDaniel says the company's basic philosophy is not to pass a defect along to the customer -- it's part of the design process [source: McDaniel]. Every Toyota auto manufacturing plant has an andon cord at each station on the assembly line. When the person at a station notices a problem, he or she pulls the cord, and a group leader comes to inspect the issue. Typically, the problem can be solved quickly, and the andon cord is pulled again so the manufacturing process can continue. However, if there's a serious problem or defect, the line is stopped until the situation is resolved.

Auto manufacturing is a complicated process, so it's not uncommon for problems to occur on occasion. For example, in 2003, Nissan began finding flaws in some of the vehicles produced at its Canton, Miss., plant and had to locate the source of the problem. Fuel doors weren't fitting correctly on some cars, and it was soon discovered that an unreliable gauge was being used to measure the part. Nissan also realized that the lighting in its inspection area was too dim to identify some minor problems during a vehicle's examination [source: Zachary].

Nissan, of course, fixed the issues at its Mississippi plant, and the company continues to improve its fine-tuning process. In fact, all auto-manufacturing plants are constantly looking for ways to improve their fine-tuning methods. Keep reading to learn what improvements have occurred in recent years.

Fine-tuning used to be a not-so-fine part of the auto manufacturing process. Volvo, for instance, once used two-by-four pieces of wood and rubber mallets to get doors into the right position in the frame. For decades, bumps and lumps were "fine-tuned" with a series of rubber mallets, and gaps were less than precise.

But automotive manufacturing and fine-tuning have come a long way in recent years. Take, for example, the factory where Volkswagen built its high-end Phaeton model in the mid-2000s. The vehicle was constructed along an assembly line, but the conveyor belt moved slowly to ensure each job was done properly at each station. Robots assembled the drivetrain and suspension because these pieces were too heavy for people to maneuver precisely. These measures, such as the andon cord at Toyota, ensured that fine-tuning could be kept to a minimum at the end of the construction process. Once the Phaeton was completed, it was submitted to a water bath to check for leaks, something almost every manufacturer does to its finished cars. Next, it was put into a light booth where inspectors could check for gaps, and then the car was placed on a dynamometer and driven in place on rollers so inspectors could listen for rattles.

Has all this fine-tuning made for better cars? You bet. Read on to learn how it makes a difference.

When fine-tuning is at its best, car companies earn better reputations and even awards. J.D. Power and Associates, for instance, ranks companies each year for its Automotive Performance, Execution and Layout Study, a report more commonly known as APEAL. While design and engineering play important roles in automotive manufacturing, fine-tuning is what really earns the execution score.

Fine-tuning a vehicle as part of the auto manufacturing process saves time and money and prevents complications for companies and consumers alike. It also reduces the number of recalls a company may have to issue, and it can make buyers more satisfied with their cars and the manufacturer. As McDaniel said, "If you build in quality, it saves in the long run" [source: McDaniel].

Whether the fine-tuning is performed throughout the process as Toyota does, or in a concentrated effort at the end like Aston Martin, the attention to detail pays off in better-built vehicles and happier customers.

For more information on automotive fine-tuning, see the links on the following page.