U-Bet 2 is a custom motorcycle that started out as a wrecked Harley-Davidson. See more motorcycle pictures.

Hard to believe, but the radical chopper U-Bet 2 began life as a Harley-Davidson -- albeit a wrecked one. Bill Steel was the artisan who transformed the pile of parts into the striking machine seen here.

Actually, about the only Harley components used were the 88-cubic-inch Twin Cam 88B engine and its attendant 5-speed transmission. The bent frame was replaced by a chassis from Goldammer, which included inverted forks in front and a single-sided RC Components swingarm in back. Both ends feature adjustable air suspension, the compressed air being stored in the frame tubes.

The fuel tank came from the catalog of Paul Yaffe, but was modified to blend into the surrounding custom sheetmetal. Both front and rear fenders, along with the oil-tank surround, were hand-formed by Bill Steel. RC Components supplied the wheels and the rear brake disc/pulley, which, along with the single-sided swingarm, allows the right side of the wheel to run completely free of obstruction.

Yes, it's hard to believe this grew out of a wreck. And it has certainly come a long way from Milwaukee...

Check out the next page for more photos and details of the custom chopper, U-Bet 2. 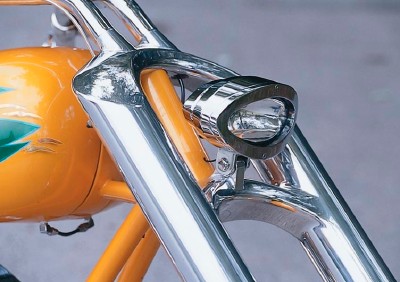 Smoothed fork legs from Goldammer really stand out on U-Bet 2. Note that even the perch for the headlight is flushed into its surroundings.

Bill Steel built U-Bet 2 using components from a wide range of manufacturers. See pictures and details of this chopper below.

All cables and wires run inside U-Bet 2's handlebars for a cleaner look. Tiny rearview mirror on the left bar-end is enough to make the bike legal.
The Harley-Davidson 88-cubic-inch V-twin is polished and fitted with custom intake and exhaust.
U-Bet 2 has a single-sided swingarm and combination brake disc/pulley from RC Components.