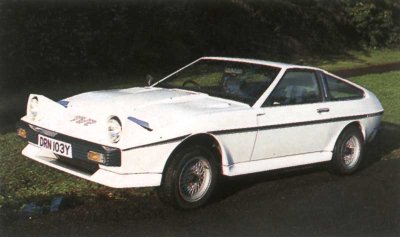 The TVR Tasmin had a sleek 80's look, setting it apart from TVRs of the past.

Tiny TVR entered the 1980s with a new and very dramatic-looking replacement for the M-Series/Taimar, the Tasmin. In the eight years since, its chassis has carried Rover and Ford Europe engines, manual and automatic transmissions, and convertible, coupe, and 2 + 2 body styles. Add in interim facelifts and model-name changes and you have a complex story. U.S. models are much easier to track; so far, all have had a German Ford 2.8-liter V-6, and most have been ragtops.

Despite the different variations and their differences from previous models, all these TVRs share two traits. First, they’re hairy-chested sports cars in the great British tradition. Second, they’re the most thoroughly sorted and best-built TVRs ever.

The first of the breed appeared in January 1980: a wedgy two-seat hatchback coupe called the TVR Tasmin. The derivative 2 + 2 and convertible appeared within a year on the same 94-inch wheelbase.

Though its engineering was new, the TVR Tasmin hewed to TVR’s usual design philosophy and layout. Despite the longer wheelbase, its chassis was basically the same “space frame” used on the M-Series/Taimar, made up of small-diameter tubes, some round in section, some square. All-independent coil-spring suspension and rack-and-pinion steering were also inherited, but disc brakes were now used at the rear as well as at the front. As before, bodies were built up from fiberglass moldings, and major components like engines, transmissions, and differentials were purchased from volume automakers.

Styling was where the TVR Tasmin most obviously broke rank. Here was the first TVR that could honestly be called pretty instead of just “distinctive” (often the motoring journalist’s synonym for ugly). Contours were of the “folded paper” school popularized by Giugiaro, perhaps a little dated for the “aero-look” Eighties but a vast improvement on previous TVRs.

In front three-quarter view the TVR Tasmin was quite reminiscent of the Lotus Excel, but an unusually long hood (necessary for the favored “front mid-engine” positioning) gave it an entirely unique profile. The “anteater” nose, sloped down ahead of the hood and from a breakline above the front wheelarches, looked a bit odd, as did the quite lengthy front overhang and abbreviated rear overhang. Aside from fattish B-pillars, coupe roofs seemed almost delicate.

The coupes were difficult to distinguish at a glance, but their proportions differed in detail. Since the 2 + 2 shared the two-seater’s wheelbase, its back seats were a tight fit and thus a token gesture for all but the smallest living beings. Happily, the convertible pretended to be nothing but a two-seater, and its fold-away Targa-style hoop was a novel idea welcomed by fresh-air fiends.

The principal engine during the TVR Tasmin’s first four years was the fuel-injected version of Ford Cologne’s 2.8-liter ohv V-6, familiar on both sides of the Atlantic from the early Seventies through its 1987 phaseout (in favor of a reengineered 2.9-liter evolution). It had already been desmogged, which allowed TVR to resume U.S. sales in 1983 after an absence of several years. With about 145 SAE net horsepower, the federal Tasmin could see 125 mph all out.

Though ride was still quite hard by most any standard, the TVR Tasmin was far more modern and integrated than any previous TVR, with eager handling and thoroughbred road manners, plus those striking looks. Unfortunately, it also cost a lot more to build. TVR tried to recoup with a detrimmed price-leader powered by Ford Britain’s 2.0-liter “Pinto” four, but sold only 61 in three years.

Meantime, TVR changed hands again, with Peter Wheeler taking over from Martin Lilley in 1981-82. Wheeler wanted more performance and, like TVR’s previous owners, began dabbling with engine swaps. After trying a turbo V-6 (two prototypes were built) he settled on Rover’s all-aluminum 3.5-liter V-8, basically the early-Sixties Buick unit that had since gone into the Triumph TR8 and Morgan Plus 8 (see entries) and still powers the luxury Range Rover four-wheel-drive wagon. In its latest fuel-injected form it delivered 190 bhp.

But it was only a first step. Late ’84 brought the 390SE, a bored-out 3.9-liter limited edition that could “outdrag a Porsche Turbo,” according to one British magazine. Styling was smoothed out a little for 1986, when the even hotter 420SEAC arrived, boasting no less than 300 bhp from a newly enlarged 4.2-liter V-8, plus swoopy rocker-panel skirts and full color-matched exterior.

With a top speed in excess of 150 mph and a British-market price of around $45,000, it’s a long way from early TVRs, and a welcome addition to the growing ranks of high-performance cars that will take us into the Nineties.

To learn more about TVR and other sports cars, see: