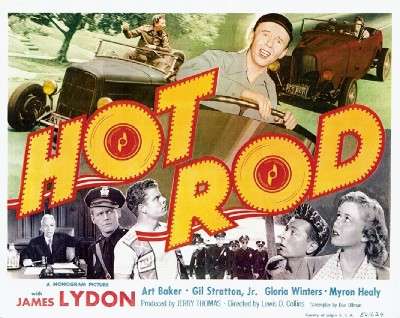 The movie Hot Rod was probably the first of its kind, arriving early for the hot rod movie frenzy in 1950. See more hot rod pictures.

The great burst of hot rod movies, and the appearance of TV hot rods, came nearly a decade after the original growth of the California hot rod movement that was spurred by young World War II vets. Hot rod movies came into production beginning in the mid 1950s as a reflection of the preoccupations of a younger generation of hot rod enthusiasts.

The kids who comprised this new audience had been toddlers or just entering grade school in 1945. Ten or 12 years later, they were old enough to drive and, like the first-generation hot rodders, they came to the party with plenty of disposable income.

American business catered to these teens in many ways, of course: clothing, music, food, radio, television (remember rod-loving Kookie on 77 Sunset Strip?). And then there were "teenpics," movies shot in a week to ten days by independent producers for $80,000 to $100,000, and usually released in pairs as double bills. Fast and gaudy, they became wildly popular at drive-in theaters, America's "passion pits."

Major Hollywood studios were slow to recognize the new audience demographic, partly out of cultural ignorance, partly because of inbred disdain for "exploitation pictures." Other, smarter moviemakers, who had heretofore existed on Holly­wood's fringe, grasped that teens wanted to see hyped-up representations of themselves on screen.

The most successful and visible of the hip independents, American-Inter­national Pictures (AIP), didn't even own traditional studio facilities. Instead, AIP leased space on an as-needed basis, and set up cofinancing and distribution deals with box office-savvy ­inde­­­pendent producers like Roger Corman and Alex Gordon.

AIP took a fat cut of each picture's gross, and used the profits from one movie to finance the next. This was assembly line filmmaking, granted, but it had energy and verve, and paid young audiences the attention that other, larger studios weren't ­providing.

After science fiction, the hot rod/juvenile-delinquent thriller was the most popular teenpic genre. AIP's enormous success inspired Allied Artists, Howco, Filmgroup, and other indies who released hot rod pictures with metronomic regularity. By the late 1950s, the B-picture units of Universal-International, Columbia, and even high-hat MGM had made their way to the dragstrip.

A few stars emerged -- Mamie Van Doren, John Ashley, Yvonne Lime, Brett Halsey -- but the main appeal for audiences was the vicarious pleasure of witnessing rebellious, middle-class kids dismiss their parents as "square," and rip up the streets with their rods.

The thrill of speed was complemented by rock 'n' roll, gang tussles, occasional comic relief, and lots of well-filled sweaters. Nobody claimed this stuff was art, but it sure was fun.