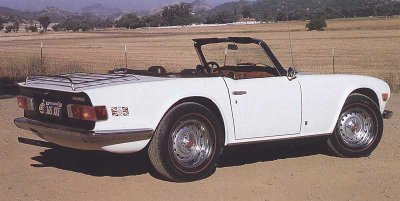 One British writer called the TR6 “the last of the hairy-chested mass-produced sports cars.” That’s accurate, if one considers that the TR6 was compared, usually unfavorably, to the first of the new-era sports cars, the Datsun 240Z. See more pictures of Triumph sports cars.

It was no Austin-Healey 3000, but the Triumph TR6 was a good substitute for those seeking a traditional "big six" British roadster with a masculine image.

The TR6 was a follow-up to the 1967-68 TR5 PI, which was basically a TR4A with a torquey pushrod six instead of a four. PI meant "petrol injection," newly applied to extract 150 hp from the elderly 2.5-liter engine. But Triumph's fuel-injection system somehow ran afoul of U.S. emissions standards, so Americans got a similar TR250 model with a detoxed twin-carburetor engine making only 104 hp.

That setup was used for the TR6, which bowed in early '69. The TR4A-origin body got a new look thanks to Karmann of Germany, and it was a very effective facelift, with a trendy chopped-off Kamm tail, a longer hood, and a prominent wide-mouth grille. The accessory hardtop also was revamped, gaining a more angular look and orthodox one-piece construction.

Road & Track found in its $3,400 1971 TR6 test car a "distinctive combination of qualities at a reasonable price . . . with ride and handling far from outstanding and a somewhat cramped cockpit but . . . an excellent 6-cyl. engine, luxurious finish and trimmings, and a roadster top that's easy to put up and down." The editors also had "no question" about reliability and durability, but they were writing well before Japanese cars began redefining those terms.

Muscular styling, with squared shoulders and big wheel openings, fueled the TR6’s image. So did the hidebound but wonderfully torquey ohv inline-six.

The TR6 lasted some seven years with few interim changes. Among the more important were a reprofiled camshaft giving a smoother idle and better low-speed tractability, plus an updated version of the optional Laycock electric overdrive; both appeared in early '73. Far less welcome were the big and ugly black bumper guards that sprouted on 1973-74 U.S. models, a necessary response to new five-mph impact standards. Still, the big TR aged gracefully.

But it couldn't last forever, and the old soldier faded away in mid-1976. By that time, troubled British Leyland Corporation had introduced a TR7 that would generate nowhere near as much affection -- or sales -- as the TR6. It was one of many mistakes that would ultimately cost British Leyland its life.