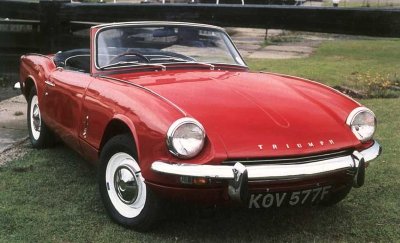 Like the rival Sprite/Midget, the Triumph Spitfire took a few years to mature. Its basic concept was always right, and everyone loved the Mark 1 and Mark 2, but a fully developed, better balanced car took time. The Mark 3, introduced in early 1967, was just such a Spitfire: faster than the earlier models, a little more stylish, and better equipped.

Triumph had neither the money nor desire for many changes in its small sports car, but the few it did make were definitely for the better. The main one was substituting the larger, 1296-cc SC ("Small Car") four from the front-drive 1300 sedan of 1965 (soon to be used in the Herald, too). With a proper eight-port cylinder head (the previous engine had siamesed intake ports) and 75 horsepower, it made the Mark 3 a near-100-mph car and, as events would prove, the fastest Spitfire of all. A more substantial clutch was specified to cope with the extra power.

The front disc brakes were more substantial, too. Otherwise, the chassis was left alone, which meant that with the bigger engine's extra torque, snap oversteer was even easier to provoke. In general, though, the Spitfire remained an eager, very responsive little car -- and safe when you respected its limits.

Imminent U.S. regulations prompted the major appearance alteration: a raised front bumper suggesting a dog with a bone in its teeth. Some thought it cute, others ghastly. For Triumph, it was merely an easy answer to an irksome Yankee requirement. Revised parking/turn-signal lights sat below, while the rear quarter-bumpers were reshaped (and still quite dainty). The top now had a proper folding mechanism and was permanently attached, making it much easier to operate than the previous do-it-yourself affair of slot-in sticks with canvas cover, though it took up more space when lowered. The cockpit itself was again spruced up, this time with handsome walnut veneer on the dash.

The cockpit of the Mark 3 was again spruced up, and access to new 1300-cc four remained superb.

The Mark 3 would continue in production through December 1970 with few interim changes, none mechanical. A rearranged dashboard appeared on 1969 U.S. models only, with instruments grouped directly ahead of the wheel instead of in the center (universally adopted with the Mark IV). All the 1970s were treated to wider wheels (4.5 versus 3.5 inches) and gained sportier steering wheels, improved cockpit padding, and other cosmetic touch-ups.

By this point, complaints about the ill-handling swing-axle rear suspension were louder and more frequent than ever, but Triumph finally had an answer here, too. No quick fix, it would help make the next Spitfire even more mature.