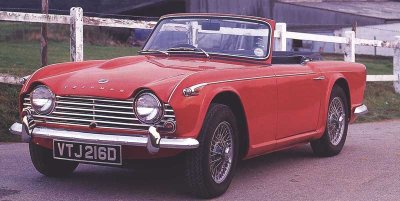 It may have been little more than a rebodied TR3, but it was that attractive new body, by Italian Giovanni Michelotti, that made the TR4 special.

Improved old wine in a nice new bottle aptly describes the Triumph TR4. The chassis, for example, came from the TR2/TR3, though handling was improved by three-inch wider tracks and a switch from antique cam-and-lever steering to more precise rack-and-pinion. Up front was a 2.1-liter four that owed much to the sturdy 2.0-liter engine of previous TRs. The same held for the four-speed manual gearbox, though a synchronized first gear struck a blow for modernity.

That left a new slab-sided body as the main attraction. Designed by Italian Giovanni Michelotti, it looked rather masculine despite a softly curved front with full-width grille and distinctive "eyelid" headlamps. Road & Track contended that on "strictly practical grounds, there is no disputing the worth of the new bodywork. [The] squared-off stern provides space for a relatively large luggage locker, and a couple of much-needed inches of width have been added to the interior. The coming of true civilization was most apparent in the provision of rollup side windows." The soft top, alas, remained a time-consuming complexity, but in-dash ventilation was a first for a British car, and the optional lift-off hardtop now had a replaceable canvas section that made for a "surrey" roof, a sort of early targa idea.

Inevitably, the TR4 was heavier and a bit slower than late TR3s, and stiff springing continued to give a rock-hard ride and some unwanted bump-steer. But Triumph had a fix for the latter: independent rear suspension, via coil springs and semitrailing links. It arrived in 1965 for a revised TR4A that also featured a permanently attached soft top that was much easier to operate. Although the new rear end tended to bottom easily, it improved handling and ride comfort, especially on rough surfaces. No wonder the independent suspension quickly went from optional to standard equipment.

Triumph built 40,253 TR4s before moving on for 1965 with the TR4A. This one got a better soft top and a bump to 109 hp, but more importantly, made available a coil-sprung independent rear suspension.

The TR4A only enhanced the Triumph that had impressed Road & Track as offering "excellent performance at moderate initial cost . . . [A] sporting driver would search for a long time to beat the combination." Still, time waits for no car, and rivals were beginning to beat the TR4 on several fronts by 1968. But Triumph had a fix for that, too: the TR6.