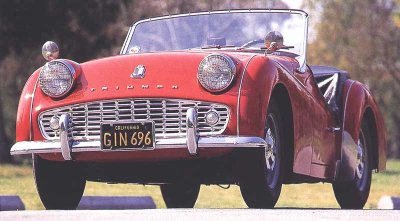 The TR3A features a wide-mouth grille, modified headlamps, a locking trunk, sturdier bumpers, and another 5 hp.

Before there could be a Triumph TR3A, there had to be a TR3. Well, for everyone except Triumph, which never officially applied any suffix letters to these cars -- or to the later TR3B. But distinctions are necessary for discussion, and they've long been part of TR lore.

We should also note that the Triumph TR3 went through two phases. The first involved the 1955-56 models, which were distinguished from the TR2 by a flush-set eggcrate grille. Modified ports and larger carbs (still twin SUs) added 5 hp to give the 2.0-liter four-cylinder 95. Five more came by an interim switch in cylinder heads after the first 3,300 engines, from the introductory "LeMans" casting to a "high port" design.

Those handles became standard with the TR3A, which bowed for 1958 wearing a rather Detroit-inspired "wide mouth" grille plus a locking trunk handle and modified headlamps; sturdier bumpers were less obvious. Although sales were better than ever, Triumph was working on a more stylish sports car that would materialize in 1961 as the TR4. Perhaps as a preview, the new model's upsized 2.1-liter engine became available for TR3As starting in 1959, though apparently few were installed.

However, Triumph found itself with a surplus of TR3As by 1961, the result of misjudged market demand and overproduction. Happily, the firm's U.S. distributor wasn't that sure of the new TR4, and deciding to hedge its bets, offered to dispose of leftover TR3As. The result was an American-market conversion, the TR3B, with slightly nicer appointments and the TR4's new all-synchro gearbox. All but 500 also received the 2.1 engine.

As it happened, the United States took to the TR4 in a big way, so after seven years, the TR3 generation was honorably retired in October 1962. It had done a remarkable job. The TR4 would do an even better one.