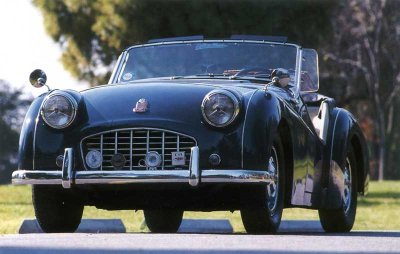 A forward-mount eggcrate grille distinguished the TR3 from the TR2.

The well-received Triumph TR2 suffered a sales slowdown in 1954 as production ran ahead of demand and inventory piled up. Nevertheless, Standard-Triumph was sufficiently confident about its sports car's future to proceed with an updated successor. Predictably called TR3, it bowed in the fall of 1955 just in time to do battle at home and overseas with the smart new MGA 1500.

Changes abounded. Outside, an eggcrate grille filled the 2's open "mouth" with recessed mesh, badges bore the new model number, and you could now order an "occasional" - that is, token -- rear seat. Under the hood, larger-choke SU carburetors and modified ports upped output of the 2.0-liter four by five horsepower. Even so, performance suffered due to a slight increase in weight, and some road testers pointed out that fuel economy suffered, too. Whereas the TR2 could return 26 miles to a U.S. gallon, the TR3 was good for only about 22 mpg. But no one complained since gas was still dirt-cheap, and reliability was as good as ever.

Cylinder heads changed twice in the TR3's first year, though it's hard to tell from chassis numbers when these occurred. Regardless, the introductory "Le Mans" casting gave way after about 3,300 engines to a new "high-port" design that added another 5 horses, again to the detriment of fuel efficiency.

A more noteworthy running change occurred in the autumn of 1956, when the TR3 became the first series-built British car with standard front disc brakes. Supplied by Girling, they were accompanied by modified rear drums attached to a new and more robust axle. The car was already selling well, but it did even better once stopping power was equal to go-power. As proof, calendar 1956 export sales totaled 4,726 units, but the '57 tally was 10,151. The figure would go even higher in 1958, and again in '60.

The cockpit of the TR3 was much the same save availability of the “occasional” rear seat.

Like its predecessor, the TR3 would last only two years. Triumph was now moving full steam toward all-out success among production sports cars. Next stop: the TR3A.