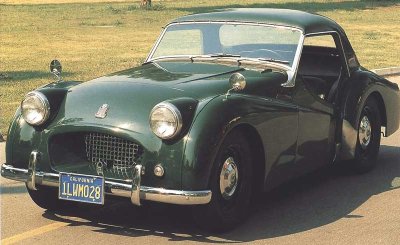 For an early '50s sports car, the Triumph TR2 was a revelation. Not only did it offer fine performance, good fuel economy, and modern styling, it cost little more than an MG and far less than a Jaguar -- not bad for Triumph's first true sports car.

Triumph of Coventry built motorcycles and cyclecars before turning to proper automobiles in 1923. By the mid-1930s, it was selling lush sports-tourers that did well in international rallying. Then the Depression forced the firm into liquidation, leaving Sir John Black's Standard Motor Car Company to acquire Triumph's automotive business in 1944.

Black envied MG's growing export success but had failed in a bid to buy Morgan, so he ordered up his own sports car for Triumph. A 1952 prototype, the 20TS ("TR1"), looked promising but needed more work, so engineers Harry Webster and Ken Richardson devised a sturdy new frame to replace the original '30s-era chassis, plus an improved "wet liner" version of the overhead-valve four from Standard's 1949 Vanguard sedan. Longtime Triumph designer Walter Belgrove added a longer rear end that worked beautifully with the prototype's smooth nose, integral fenders, and cutaway doors.

The TR2 used body-on-frame construction and a suspension that employed coil springs and wishbones in front and a live axle on leaf springs in back.

Logically named TR2, the new sporting Triumph was warmly received on its 1953 debut. Few contemporary cars offered 100-mph performance for so little money (just under $2,500) -- nor up to 26 miles per U.S. gallon when driven with restraint. Although the ride was harsh, handling a bit crude, and the cockpit typically two-seater tight, the TR2 was miles more modern than a T-Series MG. It even acquired a "competition proved" aura when a special streamliner ran 120 mph on Belgium's famed Jabaekke Highway.

Production was slow to get rolling -- just 250 cars in all of '53 -- but improvements came quickly. By 1954, Triumph was offering extra-cost wire wheels, electric overdrive, radial tires, and even a lift-off hardtop.

With all this, plus inestimable British charm, the TR2 heralded Triumph as a sports-car force to be reckoned with. Even the new 1953 Austin-Healey 100 couldn't dim its luster, for the Triumph was cheaper, if a bit less elegant. It was far from perfect, of course, but a legend had been born, and Triumph began nurturing it with the improved TR3 of 1955.