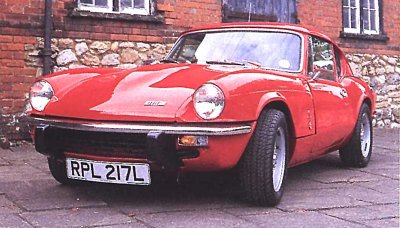 Take a Spitfire, add a fastback roof, and install a six-cylinder, and the result is the Triumph GT6.

If the Spitfire was fun with a four, reasoned enthusiasts, it should be dynamite with a six. Oddly, Triumph resisted the idea, straining as it was to meet Spitfire demand. But the little roadster had evolved from the Herald sedan, which had a six-cylinder version called Vitesse. So Triumph finally answered its public's pleas with a "big-inch" Spitfire, the GT6.

It arrived in 1966 as essentially a six-cylinder Spitfire with a fixed fastback roof that made some people think "junior Jaguar E-type." The tin-top transformation was handled by consultant Giovanni Michelotti but was patterned after the factory Spitfire GT fastbacks that raced in 1963 and '64. Triumph's 2.0-liter straight-six fit easily beneath the Spitfire bonnet and mated to a new all-synchro gearbox. Suspension was firmed up to handle 95 hp, and the cockpit was spruced up from that of the concurrent Spitfire Mark 2.

Though the GT6 shared the Spit's quirky swing-axle rear end, it was far less prone to oversteer, perhaps because it had some extra weight at the back. And starting at just over $3,000, it was a good value. Road & Track judged it a fine effort overall, "smooth, [with] good torque, low noise level, and agility as well as stability in its handling . . . [The GT6] has no parallel and it's worth the money."

For 1968, came a GT6 Mark 2 -- GT6+ in America -- with a raised "bone-in-mouth" front bumper, revamped dash, flow-through ventilation, and a rear suspension cleverly reworked to provide double-wishbone geometry for no-sweat cornering behavior. Power was unchanged for the United States but rose to 104 elsewhere via a new cylinder head and freer-breathing exhaust. A Mark 3 arrived for all markets in 1971, bearing crisp new Michelotti tail styling a la the contemporary Spitfire Mark IV, plus various detail updates. Unfortunately, strangling emissions standards reduced U.S. horsepower to 90, which then slumped to just 79.

The GT6 engine was Triumph’s own 2.0-liter and fit as well in the Spitfire chassis as it did in the company’s Herald sedan, which formed the basis for the Spitfire.

But sales were falling, too, and with the first energy crisis providing an excuse for euthanasia, the GT6 was killed after 1973. Yet it remained eminently likeable right to the end. As R&T noted in 1969: "Where else can you get a . . . 100+ mph coupe with a proper chassis, good finish and jazzy looks for $3000?" Happily, that's still the going rate for even the nicest GT6s. Sports-car bargain-hunters, take note.