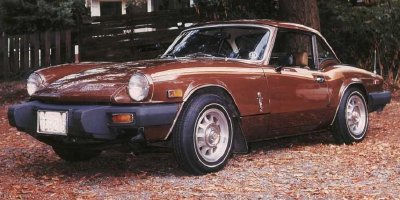 More prominent bumpers for the United States and a recontoured rear identified the Spitfire Mark IV.

After eight successful years, the jaunty little Triumph Spitfire was restyled and thoroughly overhauled for its next 10. Although this Mark IV (not the expected "Mark 4") was similar in many ways to the Marks 1 through 3, it had much better handling, more modern fixtures and fittings, and eventually, different running gear. Above all, it remained an honest little sports car in the hallowed British tradition and would swell Spitfire production to a grand 18-year total of 314,342 units.

The Mark IV originated in the late Sixties, when Triumph requested design consultant Giovanni Michelotti to produce a completely reskinned Spitfire on the existing backbone chassis, retaining the same proportions and as many body panels as possible. As with the TR6, the result was more a major facelift than a completely new design.

Michelotti had proposed flip-up headlamps, but the Mark IV front was like the Mark 3's aside from a larger grille opening and a recontoured bumper (still the bone in the dog's teeth) with black guards below it instead of overriders on it. Two-piece fenders were discarded for single units at the front but retained for the rear, which was nicely reshaped along TR6 lines, as was the accessory hardtop.

Other recognition points included GT6-style recessed door handles, reshuffled trim, and on U.S. models, distinct side marker lights as required by law. Inside was the more logically ordered instrument panel first seen on the American-market 1969-70 Mk 3.

But the most important change was down under, where the deadly old high-roll-center swing-axle rear suspension was junked in favor of a new "swing-spring" layout. This referred to a transverse leaf spring that was now free to pivot atop the differential, thus greatly reducing rear roll stiffness. The new arrangement looked virtually the same as the old but virtually eliminated rear-wheel tuckunder at high cornering loads for altogether safer and more predictable handling. Up front, the Mk 3's 1296-cc engine was retained in slightly detuned form and now mated with the new all-synchromesh 4-speed gearbox from the GT6.

U.S. Mark IVs followed the GT6 in another way, with performance that declined each year as emissions standards tightened. The '71 models had only a single carburetor and 58 horsepower -- even less than on the original '62 model. Output faded to a pitiful 48 bhp on the '72s, which could only reach about 80 mph, yet no fewer than 9687 were delivered that year.

There's no substitute for cubic inches -- er, centimeters -- even where the goal is cleaner air, not higher performance. Accordingly, 1973-74 U.S. Spitfires received the stroked, 1493-cc engine (still with single carb) that would go into the MG Midget beginning in late '74, a move that would simplify emissions certification for British Leyland, which was home to both these cars by now. Available horsepower rose to 57 -- better, if not quite adequate. At the same time, a two-inch-wider rear track, cleaned-up instrument panel, fire-retardant trim materials, and standard reclining seats were adopted.

The name was Spitfire 1500 on the '74 U.S. models, which gained a protruding lower "jaw" spoiler and big fat bumper guards (a hasty solution for that year's new 5-mph impact-protection standards). Another sign of the times: The optional wire wheels were no longer available. Non-American Spitfires received most of these changes -- including the new name -- for 1975, only their 1500 engine packed 71 DIN horsepower, making these the lustiest Spitfires of all. Top speed, for example, was back to around 100 mph.

Sadly, the Spitfire was an orphan by then. The parent body-on-frame Herald/Vitesse sedans had been dropped in 1971, and the last GT6 had been built in late '73. Production economics and BL's red-washed balance sheet meant the Spitfire would have to go soon. Somehow, though, sales remained strong enough (and even went up for a time) to keep it alive through August 1980. Then BL gave up on sports cars altogether in another of its many gropes toward profitability.

But the Spitfire had served long and well, and many were sad to see it go. The good news is that many of these cars are still around, and dirt cheap. It may never be a collector's item, but the Spitfire will always be hard to beat for low-cost sports-car fun.