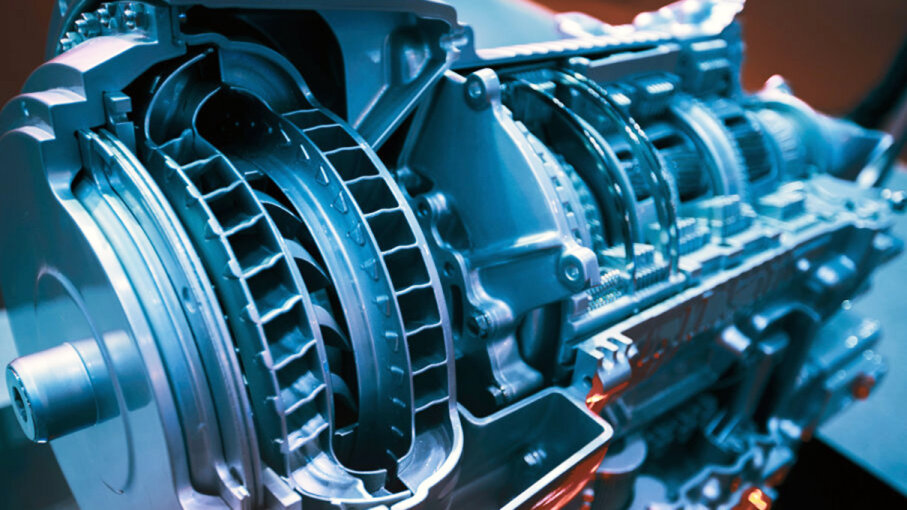 If you drive a stick-shift car, then you may have several questions floating in your head.

When I mess up and hear that horrible grinding sound, what is actually grinding? What would happen if I were to accidentally shift into reverse while I am speeding down the freeway? Would the entire transmission explode?

In this article, we'll answer all of these questions and more as we explore the interior of a manual transmission.

Cars need transmissions because of the physics of the gasoline engine. First, any engine has a redline — a maximum rpm value above which the engine cannot go without exploding. Second, if you have read How Horsepower Works, then you know that engines have narrow rpm ranges where horsepower and torque are at their maximum. For example, an engine might produce its maximum horsepower at 5,500 rpm. The transmission allows the gear ratio between the engine and the drive wheels to change as the car speeds up and slows down. You shift gears so the engine can stay below the redline and near the rpm band of its best performance.

Ideally, the transmission would be so flexible in its ratios that the engine could always run at its single, best-performance rpm value. That is the idea behind the continuously variable transmission (CVT). We'll talk about that next.

A continuously variable transmission (CVT) has a nearly infinite range of gear ratios. In the past, CVTs could not compete with four-speed and five-speed transmissions in terms of cost, size and reliability, so you didn't see them in production automobiles. These days, improvements in design have made CVTs more common.

The transmission is connected to the engine through the clutch. The input shaft of the transmission therefore turns at the same rpm as the engine, which improves both power output and fuel economy. CVTs became common in hybrid cars because they are considerably more efficient than both manual and traditional automatic transmissions, and their popularity skyrocketed from there as automakers competed for the best possible fuel economy ratings. As of late 2016, one out of every four cars sold in the United States was equipped with a CVT.

The CVT does have its downsides; most notably, it can be sluggish to drive, since it's engineered for efficiency rather than fun. However, as many drivers choose to move away from the manual transmission, which results in fewer manuals being offered, the CVT continues to increase its presence. The CVT also works best in small cars with small engines, which is why most trucks and large SUVs continue to use traditional automatics.

You can read How CVTs Work for even more information on how continuously variable transmissions work. Now let's look at a simple transmission.

Now, let's see what happens when you shift into first gear.

When the collar is between the two gears (as shown in the figure on the previous page), the transmission is in neutral. Both of the blue gears freewheel on the yellow shaft at the different rates controlled by their ratios to the layshaft.

From this discussion, you can answer several questions:

In the next section, we'll take a look at a real transmission.

Most transmissions today has at least five speeds.
HowStuffWorks

Four-speed manual transmissions are largely outdated, with five- and six-speed transmissions taking their place as the more common options. Some performance cars may offer even more gears. However, they all work more or less the same, regardless of the number of gears. Internally, it looks something like this:

There are three forks controlled by three rods that are engaged by the shift lever. Looking at the shift rods from the top, they look like this in reverse, first and second gear:

Keep in mind that the shift lever has a rotation point in the middle. When you push the knob forward to engage first gear, you are actually pulling the rod and fork for first gear back.

You can see that as you move the shifter left and right you are engaging different forks (and therefore different collars). Moving the knob forward and backward moves the collar to engage one of the gears.

Reverse gear is handled by a small idler gear (purple). At all times, the blue reverse gear in this diagram above is turning in a direction opposite to all of the other blue gears. Therefore, it would be impossible to throw the transmission into reverse while the car is moving forward; the dog teeth would never engage. However, they will make a lot of noise.

The cone on the blue gear fits into the cone-shaped area in the collar, and friction between the cone and the collar synchronize the collar and the gear. The outer portion of the collar then slides so that the dog teeth can engage the gear.

Every manufacturer implements transmissions and synchros in different ways, but this is the general idea.

What About the Automated Manual? 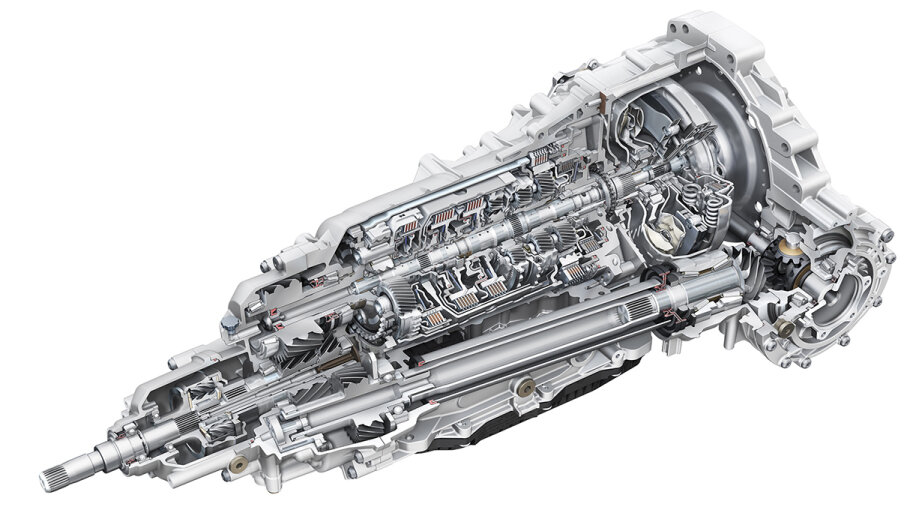 Audi's seven-speed S tronic transmission allows drivers to use its D (Drive) or S (Sport) modes. Drivers can use the selector lever or shift paddles on the steering wheel to shift themselves. Audi

The car is faster since there is no interruption in power, the ride is smoother since it's all but impossible to pinpoint the moment of the gear change, and fuel economy is better because there is no power lost to inefficient shifts. You can read about dual-clutch transmissions in more detail here.

It's worth noting that some cars with dual-clutch automatics offer a manual shifting mode, usually via steering wheel-mounted paddle shifters, but the experience is not the same. Some performance enthusiasts may bemoan the loss of the "row-it-yourself" experience, since manually shifting is an enjoyable skill to practice and perfect, but if speed is the ultimate goal, it's hard to argue with the results of an automated manual transmission.

Where Have the Manuals Gone? 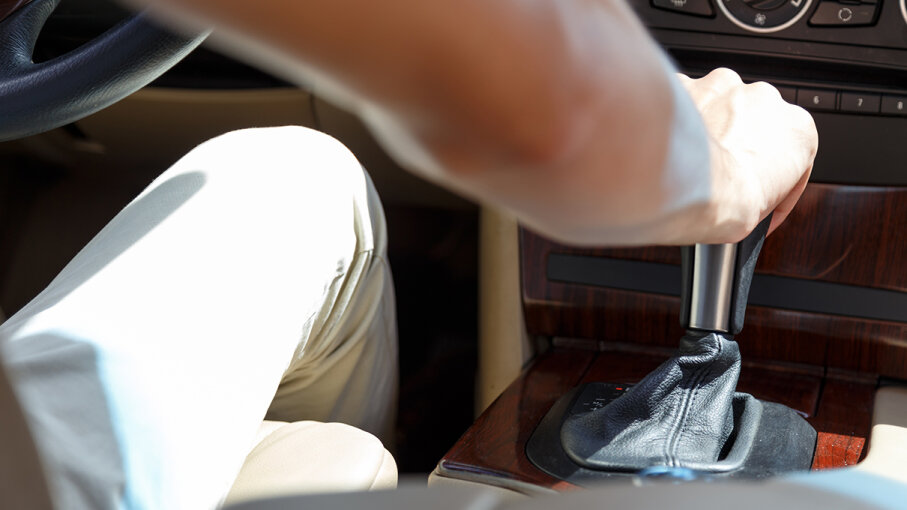 Manual transmissions, also known as 5-speeds, have declined in popularity in the United States and in 2016 accounted for just 5 percent of cars sold. Vladdeep/Thinkstock

As of late 2016, only 5 percent of new vehicles were sold with manual transmissions, according to U.S. News & World Report. That's down from a peak of about 25 percent in 1987.

Even if you're among the rare car buyer who prefers to drive a manual, you'll have a hard time finding one the next time you go to a dealership. Some manufacturers keep the manual around as an excuse to charge more for an automatic or CVT, but the flip side of that is it's difficult to get a well-equipped car with a manual transmission. If you want options such as engine upgrades or all-wheel drive, those features often come only on models or trim levels that do not offer manual transmissions. Sports cars, which used to be surefire ways to get manual transmissions, are also turning toward faster and more efficient automatic options.

Automakers say that automatic transmissions are simply better in every way, especially the CVT and dual-clutch options we covered on previous pages. Actual interest in owning a car with a manual transmission is on the decline, as well, especially as American drivers spend more time sitting in heavy traffic, where constantly feathering a clutch pedal can get tiresome. As U.S. News reported, "as drivers encounter more of these excellent modern automatics, fewer are interested in learning to drive a manual."