A Closer Look Inside 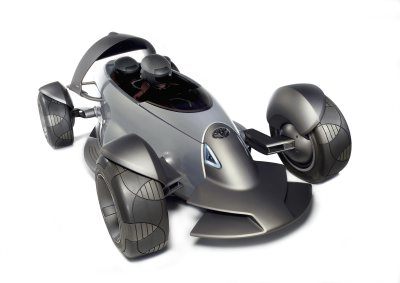 Toyota describes the MTRC as a futuristic race car concept, and it has been designed specifically to showcase Toyota's three main strengths:

Let's take a closer look at how Toyota has focused on each of these strengths.

The MTRC features not one but four separate electric motors, one in each wheel, all powered by hydrogen fuel cells to ensure zero emissions. The MTRC is certainly environmentally friendly -- no gasoline means no exhaust fumes. The only thing coming out of the MTRC exhaust is water.

The ability to control four separate, wheel-based motors gives the MTRC an unprecedented level of control, and the vehicle has a whole range of features aimed squarely at making maximum use of those motors. An electronically controlled suspension system constantly monitors road conditions, adjusting the performance of the car to match the external environment. The vehicle's futuristic-looking tires are also more than just show -- built-in sensors adapt the tires to the road surface, ensuring maximum grip.

The open-wheeled look of the MTRC is nothing new for Toyota. It clearly draws on the carmaker's experience with the Formula Toyota series of racing vehicles.

The whole body of the MTRC works to control airflow, and better aerodynamic efficiency means higher speeds and enhanced stability.

While the technology built into the MTRC already sounds stunning, there's more. Working with motor parts supplier Denso and electronics giant Canon, Toyota has developed what it calls "Mixed Reality" technology. What is it?

We all know that there are times you could use a co-pilot -- someone to give you a heads-up and make sure you get where you're going. Driving's a complicated business: You not only have to keep on top of what's happening right now, but you also have to anticipate what could be coming up.

The Mixed Reality technology is designed specifically to help with this situation. Both the driver and the passenger wear a special helmet, the goal of which is to help process information and present it to the occupants in an understandable, organized manner. Besides the usual, factual information we're all familiar with -- speed or temperature, for example -- the Mixed Reality system tries to predict future road conditions. Meshing electronically with the car's systems, it provides a constant flow of information between car and driver: road temperature, tire status or the presence of ice or snow, for example. The ultimate goal is to help the driver navigate the road and control the car more safely and with greater accuracy than ever before.

If it sounds like something out of a video game, then you won't be surprised to find out where Toyota drew some of its inspiration for this remarkable vehicle...