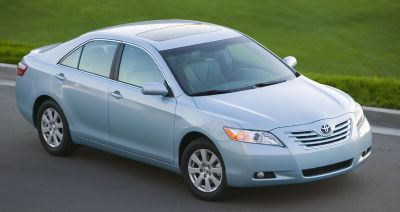 Camry had climbed to the top of America's sales charts, and Toyota sought to build on its strengths with an all-new version for 2007. Camry ushered in its sixth design generation with new styling, more muscle -- up to 268 horsepower -- and first-time availability of a gasoline/electric hybrid version.

The redesigned 2007 Toyota Camry had a more muscular appearance thanks to all-new sheet metal on a 2.2-inch longer wheelbase (now 109.3 inches). Height was trimmed an inch, but body dimensions were otherwise much as for the 2002-2006 sedans. Weight, however, increased some 200 pounds. That was partly owed to a stronger new structure designed to better withstand side impacts in line with government standards.

A revised model lineup was comprised of price-leader CE, volume-selling LE, sporty SE, and luxury XLE trim levels. (The Toyota Solara again slipped out of phase with sedan platform engineering and continued for 2007 on the previous-generation design.)

Standard for versions of the 2007 Toyota Camry was an updated 2.4-liter four-cylinder engine with 158 horsepower in "45-state" tune, slightly less when calibrated for the stricter emissions limits required in California and four Northeastern states.

The 2007 Toyota Camry Hybrid teamed a special 2.4-liter four-cylinder gas engine with a battery-powered electric motor to net a maximum 187 horsepower. Like Toyota's smaller Prius sedan, the Camry Hybrid was able to run on one or both of its power sources, depending on driving conditions. It required no plug-in charging. Power to the front wheels was by a continuously variable automatic transmission (CVT) that lacked conventional gears but provided a near-infinite number of drive ratios.

©2007 Toyota via Wieck The gas/electric Toyota Camry Hybrid can run on one or both of its power sources.

Antilock four-wheel disc brakes continued as standard for all models. So did front side airbags, but curtain side airbags were now standard too, as well as a knee airbag for the driver. The Camry Hybrid added traction/antiskid control, which was optional for other models. SE sedans again sported a firmer suspension and, like the Hybrid, specific interior and exterior trim.

A split folding rear seat was standard except on SE, which featured center pass-through. The Hybrid had a fixed back seat, because the battery pack was placed directly behind it. For the same reason, the Hybrid had less trunk volume than other Camrys (10.6 cubic feet versus 15.0).

Among features to new Camry was a keyless-entry/starting system, which was standard for the Hybrid and optional for the V6 XLE. A pocket transmitter provided hands-free wireless operation of the door locks and a dashboard on/off button for the engine.

A navigation system with wireless cell phone link was optional for SE, XLE, and Hybrid models, as were heated seats. Leather upholstery was standard for XLE V6, available for SEs and the four-cylinder XLE.

©2007 Toyota via Wieck A keyless-entry/starting system and standard curtain-side airbags are just two new features of the 2007 Camry.

The Camry has come a long way since 1983, yet the more it's changed, the more it's seemed to stay the same. Consumer Guide said, "The redesigned 2007s improve on a winning formula. This is still no excitement machine -- not even the sporty SE version -- and recent test examples have suffered uncharacteristic lapses in materials and workmanship. But every Camry is a class benchmark for powertrain and chassis refinement."

Electrical/electronic systems (2007 model year): Several owners have filed complaints with the NHTSA regarding unsatisfactory cruise-control operation and, in four-cylinder models with automatic transmission, delays in acceleration after pressing the gas pedal. While it's yet unclear whether these represent isolated incidents or more-pervasive faults, NHTSA currently has no active "defect investigations" concerning 2007 Camry and Solara vehicles.

2007 Camry: On some vehicles, the front side airbags, curtain shield airbags and/or driver's knee airbag may have inflators with an insufficient amount of the heating agents necessary for proper airbag deployment, thus increasing the risk of occupant injury in a crash. Dealers will replace the affected airbags.

2007 Solara: On some vehicles with curtain side airbags, a tether strap in the windshield pillar may be incorrectly routed; as a result, the front of the curtain airbag would not deploy as designed, thus increasing the risk of occupant injury in a side-impact crash or rollover event. Dealers will inspect both tether straps and reroute them as necessary.