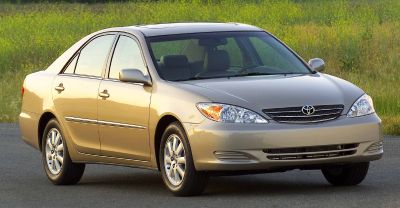 ©2007 Toyota via Wieck Consumer Guide had this to say about the 2002 Camry: "Don't buy a midsize car without shopping this one."

With new styling that made it look more than ever like a baby Lexus, the 2002 Toyota Camry signaled the start of yet another design generation for this landmark sedan. Sales rebounded from 2001 on the strength of the new model and availability of such up-to-date features as curtain side airbags and antiskid and navigation systems. Styling wasn't the only Lexuslike attribute of the new Camry; its mechanical refinement was worthy of Toyota's luxury brand, too.

Calendar-year sales of the 2002 Toyota Camry shot past 434,000 with arrival of the car's fully redesigned fifth-generation sedans. The pleasant Camry character was still in evidence, but the redesign made for a roomier family four-door that was 2.5 inches taller (at 58.3 inches overall) on a 2-inch longer wheelbase (now 107.1 inches). Length and width swelled less than inch apiece, and weight, to Toyota's credit, was little changed from the 1997-2001 generation.

The lineup was reshuffled into base LE, uplevel XLE, and sporty SE models. All carried a new four-cylinder standard engine, a 2.4-liter with 157 horsepower, 21 more than the 2.2-liter it replaced. The 3.0 V-6, available linewide, returned in 192-horsepower LEV tune for nationwide sale.

All V6 sedans and the four-cylinder XLE came with a four-speed automatic transmission and antilock brakes (ABS); both items were optional for other models. Front torso side airbags and curtain side airbags were newly available to further improve passive safety; V-6 models bundled those features with an antiskid system.

©2007 Toyota via Wieck Luxury features such as a navigation system were part of the 2002 Camry.

Once more, a new Camry scored big with mainstream car buyers. Journalists, too, were impressed. Consumer Guide sounded familiar themes in stating the redesigned 2002 Toyota Camry "brings laudable new safety and lifts comfort, convenience and refinement to near Lexus-class. Although all these cars still engage the head more than the heart, Toyota reliability and resale values are always tough to beat...Don't buy a midsize car without shopping this one."

While Camry sedans were redesigned for 2002, the 2002 Toyota Solara continued the 1992-2001 sedan platform. This year's Solara coupes and convertibles received minor cosmetic updates inside and out, plus the same new four-cylinder adopted for the redesigned '02 sedans.

Power-adjustable pedals were newly optional on Camry sedans with automatic transmission. The XLE picked up standard fog lamps, while the LE joined other models in having standard remote keyless entry.

The 2003 Toyota Solara was unchanged pending a move to the new-generation sedan platform for model-year 2004.

The SE sedan got more available kick from a new 225-horsepower 3.3-liter V6. The 3.0-liter V6 available for LE and XLE sedans was also juiced up, adding 18 horsepower for 210 total. Both these engines mated exclusively to a new five-speed automatic transmission; a four-speed automatic continued for four-cylinder sedans.

Reflecting tougher-than-ever market competition, Toyota added a lower-priced Standard sedan during the model year; this came only with the four-cylinder engine, fewer standard frills, and no options.

Meantime, 2004 Toyota Solara coupes and convertibles were remodeled, moving to the latest sedan platform. New styling added about an inch to length and 2 inches to wheelbase and overall height. It also imparted a family resemblance to the tony two-seat 2004 Lexus SC 430 retractable hardtop-convertible.

©2007 Toyota via Wieck New styling made the 2004 Solara convertible bigger and more luxurious.

The 2004 Toyota Solara coupes came in SE, new SE Sport and luxury SLE versions, convertibles in SE and SLE trim. Powertrains and other underskin components were shared with the 2004 Toyota Camry sedans. Front side airbags were standard for all Solaras, with curtain side airbags optional. Also available were navigation system, satellite radio, and, for V6 SLEs, an antiskid system.

Standard and LE sedan versions of the 2005 Toyota Camry came with antilock brakes like other Camrys. In addition, the optional automatic transmission for four-cylinder models was upgraded to the five-speed unit previously restricted to V6s.

All editions of the 2005 Toyota Camry received minor changes inside and out, including standard steering-wheel audio controls and a rear center headrest. SE sedans gained a specific new grille and a firmer suspension. Satellite radio joined the options list. The 2005 Toyota Solara stood pat for the model year.

The 2006 Toyota Camry was essentially unchanged, a hint that redesigned replacements were on the way. The slow-selling Solaras mostly marked time, as well.

Engine noise (2002, 2003, 2004 model years): The 2AZ-FE engine is prone to fan belt squeal and rattle noises on cold starting due to a faulty tensioner; an improved replacement tensioner is available.

Engine stalling (2002): The check-engine light may come on when ambient temperature is below freezing (32 degrees F), accompanied by reduced engine performance. This requires replacement of the throttle body, gasket, and intake surge tank.

Fuel pump (2002): The gas cap on some cars may become stuck, thus possibly affecting fuel feed from the gas tank to the engine. An improved cap is available.

Poor transmission shift (2002): The automatic transmission fitted to early model-year vehicles may shift poorly. The revised engine-control module designed for 2003 models can be installed in 2002 vehicles.

Valve cover leaks (2003): The oil baffle inside the valve cover may be bent or broken by careless or improper insertion of the oil-fill nozzle on some bulk oil-fill equipment, thus possibly causing leaks around the valve cover.

2002 Camry with three-spoke steering wheel: During airbag deployment, the bottom portion of the airbag cover could strike the driver, causing personal injury. Dealers would replace the driver's-side airbag module.

2004, 2005, 2006 Camry: Some airbag inflators were produced with an insufficient amount of heating agents; in this condition, the expansion force of the gas may be insufficient to properly inflate the airbag, increasing the risk of injury in a crash. Dealers would replace the affected airbag.

Despite a U.S. vehicle market flooded more models than ever and one in which trucks were outselling cars, the fifth-generation Camry remained a major moneymaker for Toyota. By 2006, Camry sales were back to record levels: 448,445 units for the calendar year, an impressive showing against Toyota's 1.1 million total car sales, including luxury Lexus models and its youth-oriented Scion brand. But Toyota could not rest on its laurels, and on the next page you'll learn what it did to keep Camry at the top of its game.