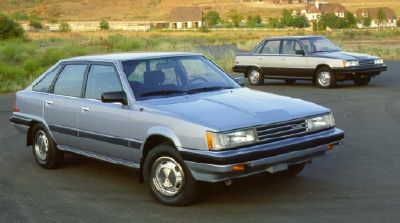 ©2007 Toyota via Wieck The 1983 Toyota Camry was available in two body styles, a four-door hatchback (front) and a four-door sedan (back).

Camry put Toyota into the American-market mainstream with a roomy, economical compact that drew new buyers to the Japanese brand. A hatchback body style and an available diesel engine broadened its appeal.

Camry bowed during the 1983 model year as Toyota belatedly switched its compact car from rear-wheel drive to front-wheel drive. Built in Japan, the Camry model line consisted of a four-door sedan and a four-door hatchback, which Toyota called the Liftback. Both body styles came in Deluxe and uplevel LE trim.

External dimensions for the 1983 Toyota Camry were squarely in the compact-car class. Wheelbase was 102.4 inches and overall length was 175.6. The car was 66.5 inches wide and 53.9 inches tall. Despite the trim size, Camry offered good interior space and a spacious feel, helped by practical boxy bodylines and generous glass areas. The Liftback's folding rear seat afforded wagonlike cargo space and versatility.

©2007 Toyota via Wieck Although it was considered a compact, the 1983 Camry had good interior space.

All models rode a four-wheel independent suspension with rather soft calibrations that made for a relatively smooth ride but compromised cornering precision. Even so, Camry was pleasant to drive, predictable in emergency maneuvers, and fairly quiet by mid-1980s standards.

The Deluxe sedan version of the 1984 Toyota Camry added a four-cylinder turbocharged diesel engine as a new option. The 1.8-liter unit was rated at 73 horsepower and was limited to manual transmission. A special gauge cluster and unique "quiet" exhaust system were included.

The one other change involved Camry's automatic transmission, which added an overdrive lockout switch that inhibited an upshift to fourth gear, useful in stop-and-go driving. Consumer Guide judged the Camry "a fine family sedan that lacks the power and suspension of a sport sedan. Other than that, it's hard to find fault..."

The big news for the 1986 Toyota Camry was a little more power. The 2.0-liter gas engine went up three horsepower, to 95, thanks to a more-efficient fuel-injection system. The turbodiesel four was now a 2.0-liter engine with 79 horsepower, up 6 from the 1.8-liter version. Automatic transmission was now mandatory with the turbodiesel and newly available in the LE sedan.

The only other changes were a revised power-brake system and, for LEs, new cloth seat and door trim.

Oil pump gaskets (1983 and 1984 model years): According to owner complaints filed with NHTSA, these gaskets can fail at high mileages or after around 10 years service; periodic inspection for oil leaks is advised.

Ignition module (1983, 1984): This electronic controller can also fail as time passes or the miles pile up. Because of its design, it cannot be repaired and must be replaced.

Seatbelts (1983, 1984, 1985, 1986): Buckles can stick or fail to latch securely; plastic components can crack or fall apart at around the 10-year mark. Belt retractors sometimes bind or don't fully take up slack in the belt.

©2007 Toyota via Wieck Toyota Camrys from 1983 were recalled for replacement of the cruise control computer.

1983, 1984: Cruise control computer could malfunction in cold temperatures after shutting off. If the cruise control switch is left "on," restarting the engine could cause racing (high revving) that could cause loss of control. Dealers would replace the computer with one of improved design.

With Camry firmly established, Toyota was poised to broaden the car's audience with new body styles and new technical features, such as all-wheel drive. It was also ready to open an assembly plant in the U.S., a decision that would prove significant to the American automotive scene. Learn about these important new developments on the next page.