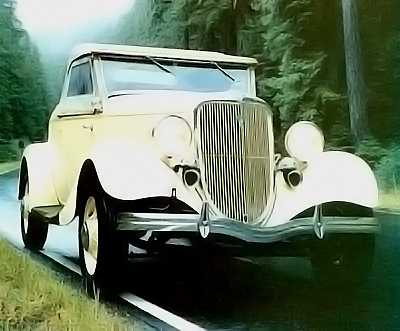 Then there's the outside of the Timmis-Ford V8 Roadster. In the unlikely event you ever get close to a Timmis-Ford, the first thing you'll probably notice is its flawless rumble-seat roadster coachwork, which faithfully duplicates every 1934 curve, line, and angle down to the last millimeter. As noted, the bodyshell is made entirely of fiberglass, and its workmanship is so good that many people mistake it for steel.

The hood actually is steel, one of the few reproduction parts employed. Radiators are reconditioned 1934 issue with sound cores.

Grille bars are painted instead of chromed, again for reasons of cost and practicality. Timmis eschews modern sealed-beam headlamps for rebuilt non-sealed originals, with genuine 1934 shells and NOS internal parts -- some taken straight out of their original factory cartons.

The attrition that made 1934 roadster bodies hard to come by in the beginning naturally affected body panel and hardware supplies. Accordingly, a number of these items are specially crafted for the Timmis-Ford V8 Roadster either by the company or by one of its 250 suppliers located in 10 different countries around the globe.

For example, the small cowl lights on some cars are top-quality reproductions from California (Ford rebuilts have been used when available), and the door handles journey all the way from Hong Kong.

Besides the bodyshell, the small Timmis shop produces such major components as bumpers, running boards, doors, the rumble-seat decklid, dashboard, floorpan, and firewall, plus numerous minor items including all hinges (even those for the glovebox), bumper brackets and taillight stands, the bows and irons for the folding top mechanism, throttle assemblies, engine and suspension mounts, seat frames, and steering columns and attachments.

The Roadster's interior is pure 1934 Ford except for the non-woodgrain dash.
none

The beautiful leatherette upholstery, which naturally extends to the rumble seat, is cut from a pattern made by Andrew Timmis himself, and the best solid brass is used for the windshield frame and A-posts. Steering wheels are supplied by Bob Drake, dash knobs and door sills by Dennis Carpenter, two names well known in early Ford V-8 circles.

The only other reproduction parts are the aforementioned hood, plus bumper guards, hubcaps, floor mats, assorted rubber parts, and the beautiful running greyhound hood mascot.

In the next section, take a closer look inside the Timmis-Ford V8 Roadster and also take a peek under the hood.