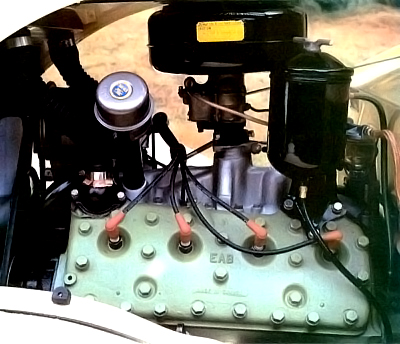 Genuine Ford flathead V-8's can be found under the Roadster's hood.
none

The unique character and special appeal of the Timmis-Ford V8 Roadster are easily understood once you understand how the car is made.

At the heart of it is a genuine Ford flathead V-8, remanufactured by Ford of Canada from “virgin” engines (unbored blocks) personally selected by Andrew Timmis. Interestingly enough, the flathead lingered on in Canadian Fords a year after it was phased out of U.S. production -- through 1954 -- and Ford of Canada was still rebuilding the occasional unit for industrial use as late as 1980.

Timmis finds the engines, disassembles them, inspects all components with a very critical eye, and sends only the best pieces to Ford’s extensive remanufacturing operation in nearby Vancouver.

A welcome update is a head-mounted oil filter, something not found on the 1934 Ford engine. Rated horsepower jumps from the original 85 to 125 horsepower at 3800 rpm.

Because of the painstaking care that goes into its rebuild, the Timmis-Ford engine comes with a 6-month/12,000-mile Ford international guarantee, versus the 90-day/4,000-mile warranty Ford Canada normally offers.

As on any 1934 Ford, the flathead V-8 is mated in the Timmis-Ford V-8 Roadster to a three-manual gearbox with floor-mounted lever. But the transmission is a 1942-1950 Ford truck unit that differs only slightly from the original, again completely renewed with NOS or refurbished parts, depending on availability.

Because the 1949s were the first Fords to abandon the firm’s old-fashioned transverse-leaf-spring rear suspension, use of their final drive assembly requires it be mounted on twin longitudinal semi-elliptic leaf springs. Timmis himself isn’t particularly fond of this deviation, but it does give his reproduction a smoother ride than a real 1934.

Another departure from spec also aids ride, the use of 16-inch-diameter Ford wire-spoke wheels instead of the 1934’s 17-inchers. This was prompted by discovery of a cache of period 6.00-16 Firestone tube-type tires, long forgotten in a dusty company warehouse.

The rear spare tire mount on the Timmis-Ford was either NOS or hand-picked used.
none

Supporting the Timmis-Ford V8 Roadster's carefully crafted fiberglass body is a genuine 1934 Ford frame, which is cleaned, checked on a jig, reconditioned where necessary, and painted before any chassis components are installed. The last, like the frame itself, are all NOS or hand-picked used, and include the steering box (a 1953-1954 unit that offers superior steering characteristics), front suspension wishbones and transverse leaf spring, the I-beam front axle, front fender brackets, rear spare tire mount, and handbrake lever.

Engine and chassis electrical wiring is all-new, of course, and the system is updated from 6-volt to modern 12-volt operation. Two more concessions to contemporary convenience are a voltage regulator (hidden behind the dash) and a full set of safety fuses.

Rounding out the chassis are hydraulic brakes, which Ford didn’t get around to until 1939. The Timmis-Ford has them, a plus for safety, though they’re non-assisted drums, again NOS units. The fronts are 1940-1948 vintage, the rears 1949-1953.

There's more to the Timmis-Ford V8 Roadster body than meets the eye. Read on to learn more about this replicar's unique exterior.