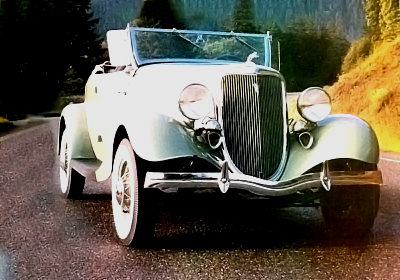 The Timmis-Ford V8 Roadster is one of the world's rarest (and priciest) replicars.
none

Consummate craftsmanship meets with a purists' passion for authenticity in the Timmis-Ford V8 Roadster -- a unique reproduction automobile built at the rate of only about one per year. Here's the story of rare and rarefied

replicar -- a labor of love for its dedicated creator.

Let's say you've always wanted to own a 1934 Ford but have so far missed your chance. Now, suppose that one day you just happen to stumble across H. G. Wells' fictional time machine -- only this one really works. The controls are locked on 1950, but you discover a note pinned to the seat saying that you may return to that year and bring back to the present any one item of your choice.

Intrigued, you hop in, hit the "on" switch, and are instantly teleported back in time. Amazingly, you materialize in front of a used car lot. There, wonder of wonders, a beautiful 1934 Ford V-8 Deluxe Roadster sits shimmering under the lights, looking like it had just rolled out the factory door.

The salesman, a fast-talking lout in a plaid sport coat, tells you the previous owner had been forced to "modernize" it somewhat, with hydraulic brakes, 1935 wheels and tires, and a newer Ford drivetrain that's similar to the original, only better.

In all other respects the car is completely authentic. After thinking a moment, you decide you must have it. You quickly conclude the deal, then climb back into your time chariot and twist a couple of knobs. Suddenly, you're back home with your prize from the past.

Sounds like something from The Twilight Zone, right? Well, believe it or not, you can actually buy such a car right now -- and you won't need a time machine. How much you ask? How's $60,000?

We're talking about the world's most exacting replicar: the Timmis-Ford V-8 Roadster. It looks, sounds, and drives much like a real 1934, which it should. This is effectively a brand-new old car, more restoration than replica.

Its creator, Andrew Timmis, calls it a "reproduction automobile," and that's no exaggeration. With its thoughtful detail and consummate workmanship, his car has fooled even concours judges who've examined it side-by-side with the genuine article.

Details like this greyhound hood ornament were not overlooked.
none

That's really no surprise. Despite taking a few necessary mechanical and cosmetic liberties, the Timmis-Ford V8 Roadster is built with a high number of period Ford parts, some remanufactured, some never-used old stock.

As the company's brochure points out: "The procurement and manufacture of the many hundreds of original and authentic parts is a difficult task for Timmis Motor Company, Ltd., and in itself is one of the major reasons why the Timmis-Ford V8 Roadster is now today, and always will be, a very rare and desirable car to own. The perfection of the automobiles built, rather than the number of automobiles built, has always been the number-one priority . . ."

As a matter of fact, Timmis and his crew of about a half-dozen artisans put together only some 20 cars over 15 years or so -- and only four or five had been planned beyond 20.

If the Timmis-Ford V8 Roadster seems like an enigma, it is equally a tangible expression of one man's dedication to excellence. It's also a very personal labor of love.

Continue on to the next page to read about the man behind the "Timmis" in the Timmis-Ford V8 Roadster.