The Namesake -- And a Whole Lot More 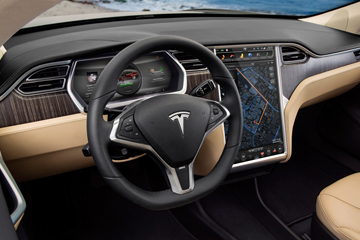 What's the secret to making the Model S so safe, and why can't other car manufacturers replicate it? Well, that's what makes the Model S so exclusive and noteworthy in the first place. Since the Model S doesn't have a traditional gasoline engine under the hood, the safety benefits are twofold. The front area is used for storage like a regular sedan's trunk, which means, basically, it's a large crumple zone, which will absorb most of the impact of a front end collision. And since there's no fuel on-board, there's no fuel to catch fire. The Model S electric motor is relatively small and mounted near the rear axle, which means it's not likely to be in the path of damage during an impact. The Model S also has a very low risk for rollover. So low, in fact, that it resisted flipping during normal testing procedures. That's thanks to a low center of gravity, with the battery and motor locations chosen for optimum balance. Aluminum construction means the body is very light and very strong, since it's reinforced with steel.

The Model S is attractive package, but not so much that it'll cause a double take. The most noteworthy thing about the exterior might be the flush mounted, pop-out door handles, because you don't even notice them until you approach the car, reach toward the door and the handle simply appears. Robert Cumberford, Automobile Magazine's resident design expert, explained that the subtlety of the exterior gracefully disguises a very aerodynamic profile. The interior is rather plain, but enclosed by lots of glass highlighting carefully chosen touches of luxury -- a 17-inch touchscreen in the dash serves as the console controls. Wood and leather trims complement a minimalist vibe. Calm and relaxing, perhaps, but some Model S owners would actually prefer a storage cubby here and there [source: Noland]. (There's also a drop-in console as an available option.) The back seat is comfortable, and larger families have the option of ordering a Model S with a rear-facing, two-seat, third row. The panoramic glass roof can block up to 98 percent of visible light and 81 percent of the heat beating down on the car, and it's controlled by a swipe of the center console touchscreen.

The Model S can be recharged at home or at work with charging stations. The hardware (called a Supercharger) comes standard on high-end models and is a $2,000 option on lower models. If the Model S needs to be juiced-up mid-trip, a network of Tesla-specific Supercharger stations will be operated by solar technology, managed by SolarCity (which is another Elon Musk project), providing free unlimited charging to Tesla owners. About 20 minutes on a Supercharger will gain about 75 miles (120.7 kilometers) of driving range [source: Noland]. The network is expected to be in place by 2014, and will actually help the general population along with Tesla owners. That's because the solar panels will generate more power than people will need to recharge their cars, and what's left will be fed back into the grid as clean, available power. The Model S gets the equivalent of 89 miles per gallon (37.8 kilometers per liter), giving it a range of 200 to 265 miles (321.9 to 426.5 kilometers), depending on the battery option. Most subcompact EVs can only go about half that distance on a single charge. Supercharger stations also plan to offer a battery swap service. Model S owners can swap a drained battery for a full one in less than two minutes (for an additional fee, of course), but they'll also have to collect their original battery on the return trip.

So much is made of the Supercharger network that it might sound as if it's the only option for recharging. Not so. The Tesla Supercharger is just an extra convenience feature (and it's totally free for owners of 85 kWh models and accessible by 60kWh owners for an additional fee). The Model S comes with everything necessary to power up at a public EV charging station, a 240v home charging station, or, if you prefer, a plain old 120v wall outlet in your garage -- although it'll be just a bit slower. Charging times can be scheduled via the car's touchscreen controls or a smartphone app.

The Model S isn't flawless, and its biggest problem seems to be power retention. Owners report what they call "vampire" power losses -- noticeable drains on the battery while the car is parked. The problem is fixable with a software update; kind of like downloading an operating system update on your cell phone (the Model S downloads it via WiFi). Tesla says there's a fix in the works but it's not ready for release yet [source: Noland]. It's well known that batteries don't function as well at low temperatures, so it's acknowledged that the Model S (along with hybrids and other EVs) would suffer the same fate. Green Car Reports says that over a few months of winter driving, the test car's range suffered by approximately 20 percent [source: Noland]. This will be less of an issue as EV infrastructure continues to develop and people become accustomed to it. Not only that, but battery technology continues to improve, too.

A couple decades ago, conventional wisdom said that, once hybrids arrived, they wouldn't be for everybody. The same went for the first few EVs. They were small, uncomfortable-looking and rather inconvenient -- suitable for short trips only. But the true success of the Model S is that it appears to be changing that perception, and Tesla seems determined to make EV ownership a possibility for everyone who drives.

There's something about Nikola Tesla that makes everyone think they knew him. Or at least, talk like they knew him. And the same can be said, I guess, for his modern day counterpart, Elon Musk. And that sets Tesla up for a lot of criticism, much like reaction to Apple. It would have been easy to spend this entire article talking about Tesla's namesake technology, or the corporate culture for which it's quickly becoming infamous. Contrarians want to prove that Tesla (the company, not the man) is not infallible. For example, Tesla lists their prices as if government incentives have already been factored in, assuming buyers will qualify for them, even if they don't [source: Ireson], which is fodder for critique. Tesla also includes preorders in sales figures, even if such an order doesn't officially qualify as a sold car. But Musk and Tesla have enough fans to weather the storm, even if, similar to Apple, a lot of adoration comes from fans who can't quite yet afford the products they covet.

One night while I was writing this article, I happened to be at a tiny dive bar that also happens to have a stage. I was there because a musician friend of one of my East Coast cousins happened to be performing. Aside from the actual performance, I was annoyed with the evening; it was a college bar and the college crowd was irritating me. One guy, in particular, was sitting front and center, enthusiastically lecturing his companion about Elon Musk and his high-speed rail initiative. Annoying, but admittedly, a little impressive. He wouldn't be going home with the cutest girl in the bar, for sure, but he did have an inkling about what the future holds. His future looks a lot brighter than mine did at that age, and he (unlike the rest of his schoolmates at the bar that night) at least has the insight to realize it (well, to the extent he thought about it while enjoying a beer, anyway). So here's to Elon Musk, for inspiring good bar discourse -- even at the expense of good music.