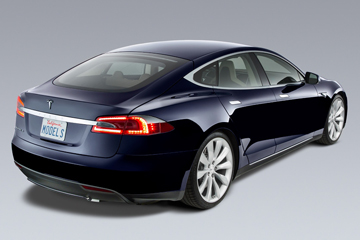 The Tesla Model S is the only all-electric car on the market that was designed from the ground up.
(Courtesy of Tesla Motors, Inc.)

Some journalists think the Model S might be one of the best cars ever built. More objective measures indicate it's one of the safest. We already know what Elon Musk thinks.

Tesla claims to have achieved the highest safety rating of any car in history. Or, in other words, the occupants of a Tesla Model S are more likely to survive a crash than the occupants of any other vehicle on the road. In a press release written by Elon Musk himself, the company all but claimed that the car is so good, the National Highway Traffic Safety Administration (NHTSA) tests were inadequate to judge its capabilities [source: Vance]. Not only that, during the procedure that measures the crush rating of the roof, the machine that attempts to press in the roof (and always succeeds, to some degree) broke.

The Model S is built in a factory in Fremont, Calif., which was originally a General Motors (GM) facility. It closed in the early 1980s, and then reopened when GM and Toyota formed a partnership to produce vehicles on shared platforms. When GM killed off some of its lower performing brands, this production facility was no longer needed, and Tesla acquired the property in 2010. The deal included some machinery as well as the production space, and was sold to Tesla Motors for just about 15 percent of the amount of the federal loan. Tesla also acquired tooling from other closed factories at a fraction of the price, and 95 percent of Model S parts (including the crucial battery packs and drivetrain components) are manufactured on-site.

Even buying a Model S is a different experience -- rather than cultivating a network of franchise dealerships, Tesla controls the entire process. The company owns small boutique-like showrooms (sometimes compared to Apple stores) where cars are tested and orders are placed. Tesla says it's simply too small to follow the traditional dealership model, and that their system is better anyway because it provides a more intimate experience for shoppers -- one that the company can control completely. (By early 2013, only 250 Model S customers had received their orders; however, another 13,000 or so buyers were still waiting. There's no reason to follow a distribution model that favors high turnover when meeting volume is the weakest link in the system.)

The Tesla Model S is the only all-electric car on the market that was designed from the ground up. (Nissan's LEAF, by comparison, is widely recognized as a groundbreaking fully electric vehicle; but it was designed and built using a lot of pre-existing Nissan parts.) And though it's based on Nikola Tesla's innovations, which are well over a century old, it's shining a light on the future of the automobile, especially when paired with Tesla's high-tech batteries. The Model S trim lines are known by their battery specs -- buyers can choose from a 60 kWh battery, an 85 kWh battery or an 85 kWh battery with extra performance features. The 60 kWh battery is rated to achieve 208 miles (334.7 kilometers) per charge and has a top speed of 120 miles per hour (193.1 kilometers per hour). The upgraded battery provides 285 miles (458.7 kilometers) on a charge, and can achieve speeds of 125 or 130 miles per hour (201.2 or 209.2 kilometers per hour). Oh yeah, and the whole package is totally emissions free.

The Signature Performance trim line produces 416 horsepower, achieving 60 miles per hour (96.6 kilometers per hour) in just 4.3 seconds. That speed is made even more fun by the instant torque, 443 lb-ft, which blows away other electric cars. Even the specs that some people would consider a limitation are a vast improvement over previous incarnations of the technology. It's also rear-wheel drive -- because it's efficient (the motor is mounted at the rear wheels), so no power is wasted traveling down the line. Rear-wheel drive also contributes mightily to the Model S performance car personality. Tesla's brake system is regenerative, which is a system in which the process of slowing or stopping the car actually collects energy and feeds it back to the battery. This isn't really any kind of all-new electric vehicle innovation -- regenerative braking became a common feature on hybrids within the last decade or so. If the Model S didn't feature such a system, it would probably be considered a massive oversight. And the Model S is silent, too, which is reportedly a little surreal at higher speeds [source: Mueller].

It isn't just the feel-good cutting-edge stuff that's helped Tesla rack up award after award. Automobile Magazine's editors were shocked by its performance and ultimately named the Model S the 2013 Automobile of the Year. (Reportedly, it initially wasn't even perceived to be a true contender.) And other auto magazines have followed suit. So what else is so great about a new car based on 130+-year-old technology?