Reflecting on Mirrorless Cars at CES

by Kristen Hall-Geisler Jan 8, 2016
Notice anything about those side-view appendages on BMW's i8 concept car, which it displayed at CES? They're cameras, not mirrors. The car doesn't have a single mirror in fact. BMW Group

Concept cars, the kind that are created to show off flashy designs and new technology, often roll onto the stage at an auto show without proper mirrors. In recent years, it's not because someone forgot to put some side mirrors on for the show. It's because mirrors are being replaced by cameras.

The technology is definitely there to make mirrors obsolete. New cars are loaded with sensors and cameras. The National Highway Traffic Safety Administration has required auto manufacturers to begin phasing in rearview cameras as standard equipment on new models this spring, with all new cars having them by 2018. It's all about safety: Cameras can see where drivers can't, like low objects or children right behind the bumper.

Some manufacturers, like BMW, are taking this a step further. The BMW i3 electric car at CES 2016 had a dual-mode rearview mirror concept. In one mode, it would show the driver the view from a camera mounted in the antenna fin on the roof. In the second mode, it would superimpose the interior of the car on the mirror, like headrests and the rear window, so the driver would have some frame of reference for what she is seeing. And in case of failure, the rearview mirror could also just be a mirror.

Interior view of BMW's i8 concept car, which doesn't have mirrors but does have a bunch of cameras.
BMW Group

So what's the holdup on these magic mirrors? Legal issues.

"We have to do a lot of testing," says Hector Arellano-Belloc, a spokesperson at BMW. "We have to test for durability, reliability, and redundancy."

It's not exactly illegal to replace mirrors with images from cameras, he says, but it's not exactly legal either. It's not something that has ever come up before, and BMW wants to make sure it's on the good side of regulations before investing thousands of dollars to bring this technology to consumers.

JVCKenwood has run into similar regulatory roadblocks. The company brought a McLaren 675LT concept to CES that they'd fitted with cameras where the side-view mirrors would be. The rearview mirror stitched together the views from both side-view cameras and the rear camera to create a seamless panoramic view around the car. But Edwin Todd of JVCKenwood notes that today there's a legal requirement to have three separate images – no stitching.

It's a matter of the technology outpacing the rules. As soon as manufacturers are given the green light, they're ready with the blind-spot-free technology of tomorrow. But if you need to get an eyelash out of your eye while driving, you might need to bring your own mirror.

NOW THAT'S COOL
Honda's LaneWatch feature has a little camera mounted below the passenger side mirror. When you flick on your right turning signal, the camera sends an image of the lane to your right to the center screen. This works not only for changing lanes on the highway but also for checking the bike lane before turning right at an intersection. 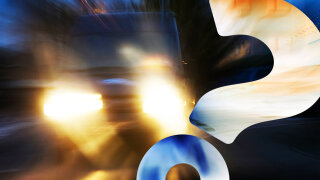 HowStuffWorks Now Video: When Your Car Tells on You 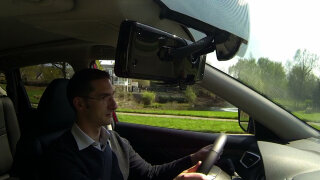