There are two takes on the future of autonomous cars. The first says that the driverless future will happen only if we turn over all driving tasks to the vehicle as soon as possible, like Google's Waymo project. The second believes that cars will move through levels of autonomy, starting with advanced driver assistance systems (ADAS). Two companies doing demos at CES 2017, Savari and Autoliv, take this second view – with “view” being the key word.

Savari's high-tech demonstration took place in an old, silver Kia minivan — nothing remarkable about it  except it had been retrofitted with Savari's direct short-range communication (DSRC) sensor to allow it to detect potential problems and avoid accidents. “This system is the easiest to retrofit in an older car,” says Chief Operating Officer Paul Sakamoto.

The company's executive director for ADAS, Faroog Ibrahim, was at the wheel. He drove the minivan through a series of obstacles in a relatively quiet Las Vegas parking lot. The Savari team had outfitted a traffic light with a small DSRC signal, the same type being deployed in cities right now, and it communicated the number of seconds before the red light would turn green to the van. The below video from Consumer Reports explains vehicle-to-infrastructure (V2I) interactions like this, as well as vehicle-to-vehicle interactions.

The sensors also picked up on the cell phone carried by a Savari engineer who trusted the system — and Dr. Ibrahim — enough to volunteer as a pedestrian about to step in front of the van without looking. The tablet set up in the console lit up red, and Ibrahim stopped in time to avoid hitting a member of his team.

The importance of DSRC, besides the fact that it's easy and inexpensive to add to older cars, is that it can be incorporated to work with newer cars. Since it doesn't rely on visuals, like lidar or cameras, it can detect objects around corners at a range of about 300 meters (nearly 1,000 feet). DSRC can complement all the other sensors found in new cars when a camera is dirty or traffic light is about to turn green.

Autoliv solves the visual problem with thermal cameras that company reps demonstrated in an inflatable black tunnel in yet another Las Vegas parking lot. These cameras can detect deer lurking at the side of the road on a foggy night or pedestrians standing beside a car with its headlights on — blinding both the driver and any typical sensors. In this demo, the thermal sensors worked with the car's advanced driver assistance systems (ADAS) to bring the car to a complete stop.

To detect the presence of an object, thermal sensors have a range of about 100 meters (328 feet, or about the length of two football fields). For identification of that object — person or other animal — it needs to be a bit closer, 50-100 meters. For comparison, the DSRC sensors in Savari's minivan can detect objects much farther away, but they can't tell a fox from a box.

Autoliv's sensors and other systems aren't as easy to drop into an older car. The company supplies complete systems, pieces of systems and custom systems to auto manufacturers around the world, depending on what that manufacturer needs.

As cars become more autonomous, multitudes of sensors for different situations will be called on to work together, feeding all kinds of information to the car's computer in all kinds of conditions. DSRC and thermal imaging are just two more kinds of sensors to fill out a car's picture of its surroundings, which means it can do more of the driving tasks.

Now That's Cool
Autoliv also equipped its demo cars with its Zforce steering wheel, which lights up like the Highroller on the Las Vegas Strip. But here, it communicated with the driver using colors and infrared technology. If you were following your programmed route, a green light appeared at the top of the wheel; if not, it turned yellow. And if both hands weren’t on the wheel, the driver would receive a mild scolding from the vehicle.

Have Star-studded U.S. Presidential Inaugurations Typically Been the Norm?

Madagascar's Most Famous Species Is Near Extinction

Unveiled at CES: The Electric Car Hoping to Beat Tesla at Its Game 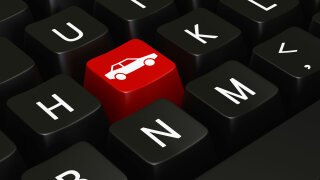