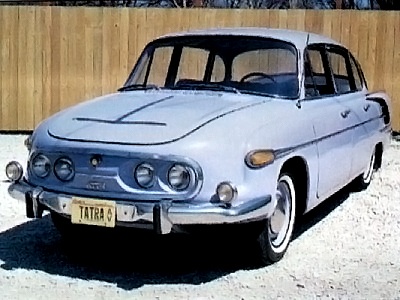 The 613 was built -- still mostly by hand -- at the Pribor plant not far from Koprivnice, which took over Tatra car production in the mid-Fifties. Like its forebears, the 613 evolved quite slowly, first with the 613-3 of 1986, then the early-Nineties 613-5. There was also a lush 613 Special on a 123-inch wheelbase, built to order in tiny numbers beginning in 1976 as transport for state dignitaries. Luxury options proliferated down the years, fuel economy improved, and a five-speed gearbox became available.

Few Western journalists tested the 613, but those who did found much to like. Phil Llewellin, for example, writing for Britain's CAR in 1993, praised the 613-5's surprisingly good high-speed stability, as well as its ride, handling, interior comfort, even performance (0-60 mph in close to eight seconds). Complete Car, another UK journal, raved in 1995, "There's enough room to accommodate every conceivable gadget as well as hordes of people -- the 613-5 even has a central heating system you can programme up to a week in advance to warm the cabin before you set off for work on a winter's morning." The magazine was less enthusiastic about the "heavy and truck-like" five-speed gearshift, however.

Today, 100 years after the Nesseldorfer President first took to the roads of Moravia, the Tatra carries on as the 700. Fuel injection was added to the Tatra V-8 in 1993. Then, in April 1996, slight exterior styling revisions and interior modifications were accompanied by the new model designation. With its 9.3:1 compression ratio, the electronically injected 3.5-liter engine generates 200 horsepower at 5750 rpm. Tatra has yet to offer an automatic transmission, though. Like its predecessor, the 700 is built on two wheel-bases.

In his 613-5 review, Llewellin judged the Tatra "an impressive and interesting car made by a company whose heritage is fascinating." That's an apt summary of Tatra's entire history, a legacy of innovation owed largely to Hans Ledwinka. How nice to know that his pioneering work lives on long after him. Perhaps now with the fall of the Soviet empire and the rise of the Czech Republic, Ledwinka and Tatra will step out of the shadows to receive the wide appreciation they have always deserved.