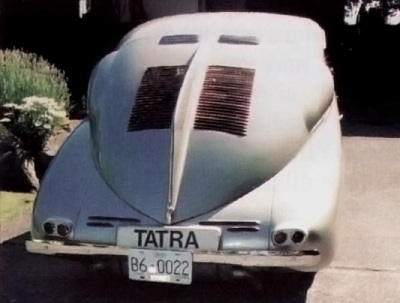 The result was a far more balanced and readable Tatra, helped by extensive use of alloy that held engine weight to 381 pounds. Still, the 603 was rather heavy, and with only 90 bhp, it couldn't quite reach 100 mph. But the 603 did surprisingly well in competition, starting with an outright win in the 1957 International Alpine Rally Later 603s did even better, finishing third and fourth overall in the 1965 Marathon de la Route at Germany's Nurburgring. The following year they ran 1-2-3 in class and 4-5-6 overall.

These and other triumphs naturally came with specially prepared cars with up to 173 bhp, but every 603 was carefully built. Indeed, series production totaled only 5992 despite a long seven-year run (which wasn't begun until early 1957).

The reason was plain. The 603 was costly and difficult to buy even at home, and little sales effort was made in other markets. A few 603s were exported, however, mainly to Austria and Belgium through the state-run Motokov Company (established in 1949). Aside from Girling dual-circuit brakes from 1958, the 603 was little changed until late 1963, when an improved replacement arrived. This was the T603-2, distinguished by open quad headlamps (grouped in closely spaced pairs), a finless engine lid, minor exterior trim changes, and, from 1967, standard ATE power-assisted drum brakes. In 1968 came the extensively modified T603-3 with Girling front disc brakes, modified valve timing, a two-inch taller windshield, and a cowl ventilator to replace the hood scoop that had ducted air to the interior. That scoop became a dummy and was accompanied by other dubious front-end alterations. A poorly revised dashboard and a larger fuel tank completed a less than successful update.

After 20,422 units, the 603 finally stepped aside for a truly modern Tatra. This T613 was a long time coming, in development since the mid-Sixties, but not publicly shown until the 1974 Moscow Industrial Fair. Even so, it was a relatively giant leap forward. Stubbornly ignoring world industry practice, the 613 retained an air-cooled rear-engine layout, signalled by a grille-less front and only modest louvers on the rear "decklid." The engine, however, was a new 165-bhp 3.5-liter twincam V-8. It was positioned to put the car's center of gravity slightly ahead of the rear axleline -- almost a mid-engine design. The result was a reasonable front/rear weight balance of about 45/55 percent.

Suspension comprised rear halfshafts on slanted triangular arms, front MacPherson struts, all-round coil springs and telescopic shocks -- all quite modern. So was the styling: an airy four-door notchback drawn by none other than Italy's Vignale (to most everyone's surprise). Though undeniably boxy, the 613 was well proportioned, helped by a 117.3-inch wheelbase.

Find out about the Tatra 613 on the next page.