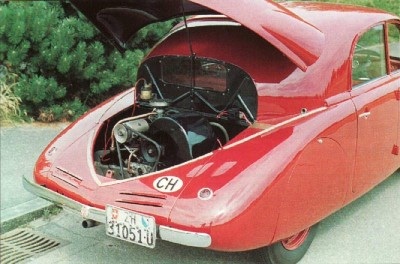 Like most of Eastern Europe, Czechoslovakia was isolated behind the Iron Curtain after World War II, and so, naturally, was Tatra. Though Czech automakers met to coordinate postwar plans soon after peace returned, the advent of Soviet political dominance and the nationalization of Czech industry dashed whatever hopes there might have been for exporting to the West. At least Tatra's plants escaped the war with little damage, and though its cars were now too extravagant for most East Bloc consumers (other than maybe Communist Party officials), even beleagured socialist economies would still need plenty of Tatra trucks. Tatra thus became a somewhat shadowy government-controlled builder of heavy trucks (over eight tons payload) and of passenger cars with engines over 1.5 liters. Lighter vehicles would be the province of compatriot survivor Skoda, in line with a government "typification" plan ordained in 1947.

Not surprisingly, Tatra's first postwar cars were mildly revised 97s and 87s, but they appeared under a new company chairman, Joseph Heske, and a new chief engineer, Julius Mackerle, a student of the now-imprisoned Ledwdnka. The 87 was built in small numbers from 1948 to 1950, then disappeared in the face of scant East European demand for eight-cylinder cars. Postwar changes were mainly cosmetic, with flush headlamps and a simulated front "grille" the most obvious.

The T97 was more thoroughly redesigned to become the 1947 T107, sold as the Tatraplan 600. An air-cooled flat-four returned, but heads reverted to ohv, displacement was increased to two liters, and horsepower rose to 52. Monocoque construction continued on a four-inch longer wheelbase, and styling was modernized via a flat, divided windshield, smaller dorsal fin, engine air scoops moved from roof sides to roof top, and a bulbous new front, again with a simulated grille and flush headlamps. The swing-axle rear suspension was further modified, gaining torque arms and transverse torsion bars. In all, the 600 was about as good as it could be under the circumstances. It lasted through 1951, the year of Ledwinka's release from prison.

Ledwinka might have returned to Tatra, but he declined all invitations to do so, instead settling in Vienna and later Munich. Meantime, management indecisiveness led Tatra to suspend car production for almost five years starting in 1952. But engineer Mackerle used the time well, creating a new ohv air-cooled V-8 for commercial vehicles and whatever Tatra's next car might be. A key feature was "ejector cooling." Instead of an engine fan driven by belt, which sapped power, Mackerle used exhaust gases, rather like a turbocharger.

Developed in a single-seat factory racing car, the 1950-51 T607, this system proved utterly reliable and continued through the late Sixties. A bonus was that ejector cooling eliminated the need for bulky external air intakes, thus allowing for a much larger rear window.

Finally, in autumn 1955, Tatra unveiled its next -- and only -- passenger car. Designated T603, it somewhat resembled the 1949-51 Nash Airflyte, but hewed to Tatra tradition with unitized construction (also a Nash hallmark), prominent engine air scoops (now on the rear fenders), and a vestigial fin on the back window. A new one-piece windshield was evident, as was a bulging nose with triple headlamps behind a large glass cover. Wheelbase measured 108.2 inches, but overall length was no less than 222.4. Underneath, a damped rear subframe carried Mackerle's new V-8 and the usual leaf-spring/swing-axle suspension. The front end was completely different, though, described as "independent wheel suspension by means of telescopic support and drawn swing arms, spring leafs and telescopic shock absorbers. Worldwide patent."

For more information on the Tatra 603, continue on to the next page.