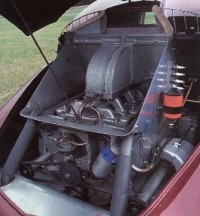 The 77A's enlarged engine and transaxle could be removed as a unit for service.
©2007 Publications International, Ltd.

Yet for all its daring, the 77 was, in Thursby's words, "a flawed vision, and Ledwinka knew it." Thus, an improved T77A appeared barely a year later with a bored-out 3.4-liter V-8 making 74 bhp, plus structural upgrades and better cooling from the addition of large lateral louvers and roof air scoops. Also evident were a bigger dorsal fin, a three-piece windshield not unlike that of Raymond Loewy's contemporary Hupp Aerodynamic, rear vent windows, windshield defroster, and a third headlamp in the center of the nose (the future Tucker copied that idea, too). Leather upholstery became available, as did a division window and steel sunroof. With all this, Tatra had a truly world-class car, but one seldom seen outside its native land. The main reason was painfully slow production: just 105 for the 77 and 150 for the A-model.

The 77 was a sharp contrast to other mid-Thirties Tatras, all conventionally styled front-engine models. These included the last of the big T80s, the little 57s, and the 54-hp ohc four-cylinder T90, sold only in 1935. As usual, though, Hans Ledwinka was about to shake up things in his own unique fashion.

Ledwinka's revolution came in the form of two significant new Tatras in 1936. Though the T97 would be ultimately more important commercially, the companion T87 was "the ultimate Tatra achievement," to quote Margoulis and Henry. It was certainly Ledwinka's personal favorite. He had much of which to be proud.

Though derived from the 77a, the 87 was a vastly improved V-8 Tatra. Wheelbase shrunk to 112.2 inches, yet styling was sleeker than ever; it also brought larger windows and wider doors (still rear-hinged in front). The reduced size combined with a more fully stressed hull to shave 900 pounds from curb weight, yet interior space was hardly affected. The V-8 reverted to T77 displacement, yet made the same horsepower as the 77a engine thanks to twin overhead cams (driven by Duplex chain). Other improvements included twin cooling fans, a front-mounted oil cooler, and 16-inch wheels (versus 18s). The rear suspension was also improved, the single leaf spring giving way to separate transverse quarter-elliptics doubling as "trailing arms." But swin; axles on a rear-heavy car don't usually make for safe handling, and the 87 was prone to sudden severe oversteer and tail-first off-road excursions. Ironically, the inventive Ledwinka had no solution for this problem. In other respects, though, the 87 was remarkable: quiet, smooth-riding, and capable of nearly 100 mph. A slippery body helped performance, and it's worth noting that a 1979 wind-tunnel test confirmed its drag coefficient of 0.36, a good value even now. Unhappily, virtually non-existent rear vision was another inherent shortcoming that Ledwinka couldn't seem to solve.

The T97 was announced soon after the 87, but didn't enter production until late 1937. It was basically a scaled-down 87 with a 102.3-inch wheelbase and a new 1.7-liter single-cam flat-four developing 40 bhp. Suspension mimicked the 77's except for canted springs, and welded unibody construction was used as on the 87. Top speed? About 81 mph.

Scoops and slats on the 77A aided cooling.
©2007 Publications International, Ltd.

As a volume middle-class product, the T97 promised to do much for Tatra's fortunes, but it never got the chance as only 450 were built. The reason was the ceding of the Sudetenland region of Czechoslovakia to the Third Reich in 1938. Suddenly Tatra was in German hands and Ledwinka was Hitler's Director of War Industry. A jealous German Transport Ministry demanded the T97 be killed for being too much like the new "Strength Through Joy" car, the budding VW. Tatra complied, but managed to build a few T87s during the war.

The dash would have looked at home in a Ford of the period.
©2007 Publications International, Ltd.

However, the Nazi occupiers quickly issued an order forbidding the German military to use 87s for any reason, this after a rash of one-car accidents killed several German officers. Disobedience carried a harsh punishment: guard duty at a prison camp.

To find out more about the post-war Tatras, continue on to the next page.