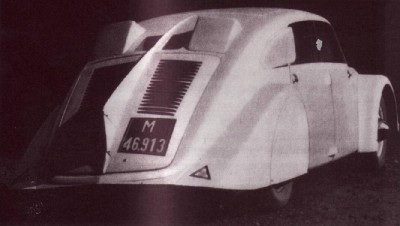 Though rarely seen in North America, the Tatra has packed a world of innovation under its distinctive bodywork for years. Much of that can be traced to the overshadowed genius that belonged to engineer Hans Ledwinka.

Tatra is not well known even among car enthusiasts. Neither is Hans Ledwinka, chief architect of these Czech automobiles for some 40 years. Both deserve far wider recognition. Ledwinka was an engineering genius to rival Ferdinand Porsche, and his Tatras were key milestones toward the automobile as we know it today.

The parallels between Ledwinka and Porsche are striking. Both were Austrian born, began their careers around the turn of the century and espoused many of the same advanced automotive ideas. Both were also needlessly imprisoned in 1945 as World War II "collaborators," Porsche by the French, Ledwinka by the Russians. But where Porsche's release was quickly ransomed by his family, Ledwinka had no such resources and thus served a long six-year sentence. He was a broken man upon his release in 1951, and he lived out his days quietly He died on March 2, 1967.

By 1933, Hans Ledwinka had expanded on the concept with a V-8-powered car the Tatra 77 .
©2007 Publications International, Ltd.

Tatra originated more than a century before in the Sustala Wagon Works, founded in 1850 by Ignac Sustala. The place was Nesseldorf, a village in the district of Moravia, kingdom of Bohemia, a small corner of the Austro-Hungarian Empire. Successful from the first, Sustala eventually expanded into rail cars, and by the late 1890s, was doing business as Nesseldorfer Wagenbau Fabriks Gesell-schaft (roughly "Nesseldorf Car Body Construction Company").

In 1895, taking note of the growing horseless carriage phenomenon, Nesseldorf acquired a Benz automobile and spare engine as "instructors" for building its own car. Lessons were learned, and the first Nesseldorfer appeared within two years. Called "President," it was conventional down to its two-cylinder Benz engine, but it sprang from unconventional minds. Chief among them were Edward Rumpler, later famous for aerodynamic "tulip form" body designs, and a 19-year-old engineering student named Hans Ledwinka.

For various reasons, Ledwinka left Moravia in 1902 to work on a steam car in Vienna, though not before building a 70-mph racing Nesseldorfer that placed second in the 1900 Salzburg-Vienna endurance run. Rumpler departed too. Meanwhile, Nesseldorfer introduced two new models; the Type A, with eight taxable horsepower, and the 12-hp Type B. Both were built in small numbers, partly because their air-cooled flat-twin engines were anything but reliable. This prompted management to call in two engineers, Mssrs. Kronfeld and Lang, but neither could come up with acceptable substitutes. Desperate for help, the company persuaded Ledwinka to return in December 1905.

It didn't take him long to create the more salable car desired, and it was in production by 1910 as the Type S. This fairly large machine (122-inch wheelbase) was also conventional except for its engine: a 3.3-liter 90-degree V-4 with pair-cast cylinders, hemispherical combustion chambers, and overhead valves operated by rocker arms from a single overhead camshaft per cylinder bank. With a creditable 30 hp, the S was a critical success that earned considerable praise for Ledwinka and considerable money for Nesseldorfer.

Ledwinka next designed a straight-six S on a 136-inch chassis, followed by an equally advanced Type T with an inline four and a 133-inch wheelbase. A six-cylinder U-model entered production in 1914 with a monobloc engine and mechanical four-wheel brakes. Nesseldorfer was well established in trucks by then, having built its first around 1900, so the S and T were also sold as commercial vehicles.

For more information on the Tatra, continue on to the next page.