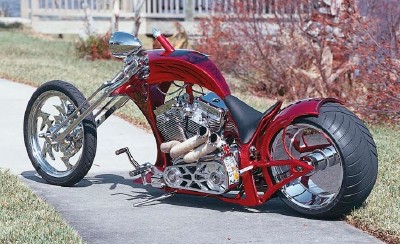 For Pain Erickson, not just any chopper would do. Thinking others might feel the same, he decided to build a series of bikes that met his own exacting standards. One was this Candy Red Suicide Softail.

As the name implies, Suicide Softail features a uniquely styled rear swingarm with adjustable air-spring suspension mounted behind the engine. And what an engine it is: 145 cubic inches of V-twin power, with custom-bent exhaust pipes wrapped in heat-shielding tape. A 6-speed Baker transmission with hand shifter feeds the ponies to a combination sprocket/rear brake affixed to a solid, chromed rear wheel.

Perhaps most distinctive, however, is the bodywork, all performed by Erickson himself. The frame was a joint effort between Thee Darkside of Daytona and Killer Choppers. Springer forks run at a steep rake of 68 degrees (most choppers are at 38-55 degrees), making for a huge turning radius. But then, it's doubtful Erickson ever intended this unique creation as an around-town grocery-getter.

Check out the next page for more photos and details of the Suicide Softail chopper. 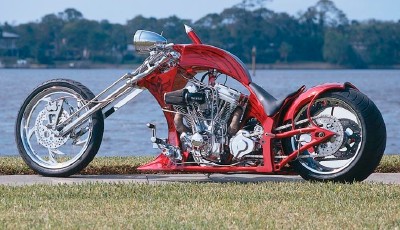 The Suicide Softail chopper has most of its frame encased in sculpted sheetmetal. Below are more pictures and details on this chopper.