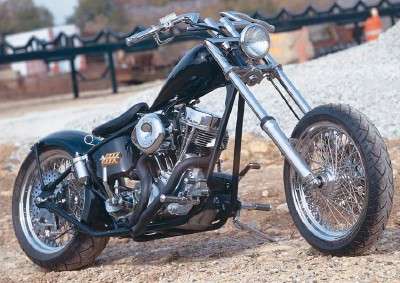 Like many Old School bikes, Suicide Jockey is a combination of old and new, though this configuration, built by Ideal Ride, incorporates some unusual pairings.

The 4-speed hand-shift transmission and some of the engine components are original from the 1955 Harley donor bike. But although the V-twin maintains its vintage Panhead look, modern high-performance components are fitted. The truncated exhaust pipes are the work of Ideal Ride.

A graceful, teardrop fuel tank sits behind "Z bar" handlebars mounted on chrome risers. The suspended solo saddle pivots at the front, acting on "mousetrap" springs at the rear. Basic black paint imparts a bad-boy demeanor to this striking mix of vintage and modern thought.

Go to the next page for more pictures and details of this Old School chopper, the Suicide Jockey. 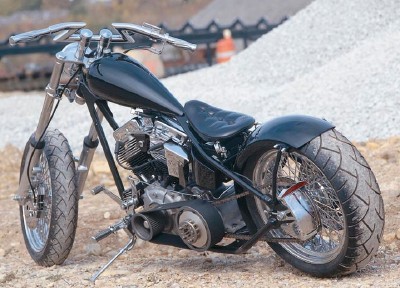 Though incorporating many modern pieces, the Suicide Jockey's V-twin wears its original "upside-down roasting pan" valve covers that prompted riders to nickname it the "Panhead." Note it also maintains its kick-starter.