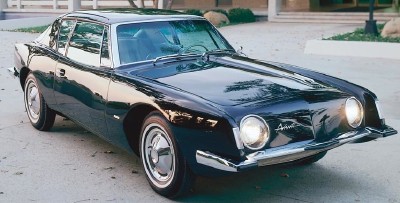 Studebaker got the swoopy, stylish car it wanted in the Avanti shown here as a 1963 model, but production problems hampered sales.

Easily the most-stunning South Bend product in a decade, the Avanti lived up to its name -- "forward" in Italian -- brilliantly conceived by Raymond Loewy and his stellar team of John Ebstein, Robert Andrews and Tom Kellogg.

Because new Studebaker designer Brooks Stevens was occupied with updating higher-volume models, president Sherwood H. Egbert had turned to longtime designer Loewy Associates for the exotic sporty car he felt would rejuvenate Studebaker's sagging image when it bowed in 1962 -- a swoopy four-seat coupe of the sort Loewy had been designing for years.

As with Chevrolet's first Corvette of a decade before, fiberglass was chosen for the Avanti bodyshell to minimize both time and tooling costs. Those same factors nixed an all-new chassis, but chief engineer Gene Hardig beefed up a Lark rag-top frame with front/rear antiroll bars, rear radius rods, and the Bendix front-disc power brakes newly optional for the '63 Lark and Hawk (the first caliper discs in U.S. production, by the way).

They also devised a trio of bored-out, 304.5-cid extensions: blown R3 with 9.6:1 compression and 335 bhp; naturally aspirated R4 with twin four-barrels, 12:1 compression, and 280 bhp; and the experimental R5 with twin blowers (one per cylinder bank), magneto ignition, Bendix fuel injection, and no less than 575 bhp.

Immediately generating high excitement, the Avanti promised to pack Studebaker showrooms like nothing else in years. Calamitously, production was delayed a critical six months by botched bodies from the supplier, Molded Fiber Glass Company (which also built Corvette shells), forcing Studebaker to set up its own fiberglass production.

By the time these and other bugs were squashed, most buyers with advance orders had canceled and bought Corvettes. Thus, just 3834 Avantis (including 500 exports) were built for '63.

Overall, Studebaker's 1963 volume was well down from '62, skidding to 81,660. Only Lincoln and Imperial ranked lower among major U.S. makes. Egbert, who'd been repeatedly hospitalized of late, left in November, never to return. (Sadly, he would die of cancer in 1969.)

A month later, new president Byers Burlingame announced the closure of Studebaker's historic South Bend plant after failed last-ditch efforts to obtain financing for future models. Operations were consolidated at the Hamilton, Ontario, assembly plant, where management hoped to return to profitability on 20,000 cars a year, all family compacts.

With that, the Avanti and GT Hawk were unceremoniously dumped after a token run of little-changed '64 models: just 809 and 1767, respectively (including exports).