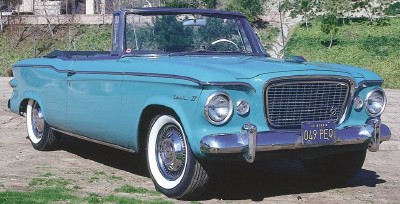 1961 was the last year before a major redesign for the Studebaker Lark.

Studebaker got a new president in early '61 when the dynamic Sherwood H. Egbert replaced the embattled Harold Churchill, who'd held the job since August 1958.

Shortly after he arrived, Egbert asked Milwaukee-based industrial designer Brooks Stevens to rework both the Lark and Hawk for 1962 on a six-month "crash" basis. Company styling chief Randall Faurot stepped aside, and Stevens whipped up cheap but remarkably effective makeovers.

All Larks now wore quad headlamps, plus elongated rear quarters, large round taillights, a Mercedes-like grille (Studebaker had been the North American Mercedes-Benz distributor since 1958 via Curtiss-Wright), and crisper nonwagon rooflines. Two-door wagons vanished, but there were four new Daytona models: a six and V-8 convertible and hardtop coupe with bucket seats, deluxe trim, and an available European-type sliding cloth sunroof for the hardtop.

For the '62 Hawk, Stevens resurrected the pillarless "Loewy" body and applied square, Thunderbird-style rear roof quarters, a matching tail bereft of fins, and a thrust-forward grille. He also penned a new dash with a full set of round gauges in a large rectangle with outboard ends canted in toward the driver.

Retitled Gran Turismo Hawk and offered only with the previous pair of 289 V-8s, it was a deft piece of work. Quick, too, with the optional 225-bhp engine good for 120 mph all out and under 10 seconds 0-60 mph. Though heavy, the 289 was strong, with far greater power potential than its modest size implied -- as we'd soon see.

Helped by an attractive $3095 base price, the GT Hawk attracted nearly 8400 buyers. Total Studebaker car sales jumped by over 30,000 to some 101,400. Regrettably, that would be the firm's only gain of the decade.

Stevens made further refinements for '63. Larks got raked A-pillars and new windshields, thinner door-window frames, a finely checked grille, and a new Hawk-style dash with round gauges, rocker switches, and a "vanity" glovebox with pop-up mirror.

Also new, and quite novel, was Steven's "Wagonaire." Offered in Standard, Regal, and Daytona form, this boasted a unique rear roof panel that could be slid forward for unlimited "head room" -- perfect for hauling tall loads. But Wagonaires leaked badly even when buttoned up, which likely explains why cheaper fixed-roof Stude wagons were reinstated during the year. Further expanding the '63 line were six and V-8 sedans in Standard and nicer new Custom trim, the latter priced between Regal and Daytona.

The '63 GT Hawk displayed a revised grille similar to Lark's, round parking lights (amber, per new federal law), woodgrain dash trim, and pleated-vinyl seats. By midseason, both Lark and Hawk could be ordered with new "Avanti" 289 V-8s: a 240-bhp R1 and a 290-bhp supercharged R2 respectively priced at $210 and $372. An R2-equipped "Super Hawk" exceeded 140 mph at Bonneville that year; an R2 "Super Lark" did over 132 mph. Those engines were named for the totally unexpected grand-touring Studebaker that broke cover in early 1962.