Tom Kellogg and the Studebaker Avanti 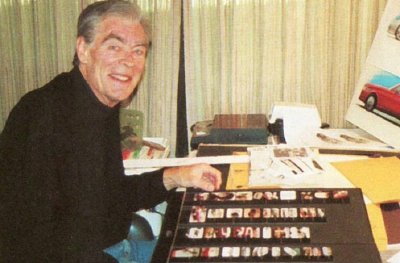 Tom Kellogg was a designer on the Studebaker Avanti team back in 1961.

During his interview, Tom Kellogg reminisced about the workings of the Studebaker Avanti design team back in 1961. Here are excerpts from that conversation:

Q: Please tell us a little about John Ebstein and Bob Andrews.

Kellogg: At first, I thought that they were sort of holding onto each other against this "mean man" Loewy, who I didn't see as mean at all. But they felt he would just order them to drop everything and come to someplace like the middle of the desert as though he had no feelings for them. But Loewy was all enthused, and his enthusiasm would sometimes cloud maybe how he treated people.

But I really enjoyed both of them. John was Loewy's right-hand man, and a super person in that he was very sensitive. He knew my needs and he was always very supportive. It was just fun working with him. And he was clever.

I didn't see him so much as a designer, but as a person who knew how to accomplish things in a very quick, easy way. Bob was very fanatical. He was always analyzing lines and scrutinizing things right down to the nth degree of tolerance. He was very thorough, slow but methodical.

Q: What did each of you contribute to the Avanti design?

Kellogg: I would say that John's major contribution was keeping us focused, and also following through on a lot of loose ends that we weren't able to complete within that five-week period.

Kellogg: One was the grille, the big front scoop. At first it was just an open hole, and some people complained that it would look kind of dirty when bugs got in there. I'm not sure about this, but I believe it was John who came up with the idea of going to a stove manufacturer and having them make an insert, a stainless-steel insert like a stove rack. Which was a good idea, because it didn't cost that much.

Also, I believe he took the common Studebaker hubcap at that time and had it restamped with the star-shape on it. He did a lot of things like that. Plus, he followed through in South Bend from what we did in Palm Springs, making sure that everything was executed as Loewy had instructed. So John was both the team supervisor and Loewy's representative with Studebaker.

Q: What was Bob Andrews' role?

Kellogg: Bob always did a good job for Loewy and Loewy was always confident that Bob would execute things very tastefully, which he did. Bob had a very high level of taste, yet he was very American in his love for cars. And he was very dedicated. He'd never say, "This is good enough." He was a perfectionist.

His role was to work on the clay. He wasn't a professional modeler, but that was the medium in which he worked. He kept things from getting exaggerated here and there from the manufacturing standpoint. Bob had a good way of bringing things together into a very disciplined package. And he was just a neat person. You couldn't help but like him.

Q: And what about yourself?

Kellogg: I did most of the sketch-work. In a way, I was trying to become each person and express what they thought. Loewy said the most important thing he wanted me to do was to keep in mind the Coke-bottle shape, the lack of a grille in front, and the other criteria he laid down.

But he also said, "Don't let that keep you from doing what you think." So I didn't. I put in my own ideas once I did what I felt I needed to do to please him.

Q: What would be an example of that?

Kellogg: The roofline that was used, although I told Loewy that I got the idea from his BMW, except I trimmed it down. The treatment was something I liked. It had a look to it that I felt could be refined. Loewy liked it too. Bob wanted more of a Ferrari-type look, and so at first we sort of established two directions.

One side of the model that Bob was working on represented more his approach, the other side another approach. Later, after Loewy came back from seeing Egbert in South Bend, we focused on the direction I liked, which I was happy about. So then both sides of the model became closer to each other. I also did a lot of sketches for interior parts and the rear under-bumper treatment and other details.

Q: It sounds like the four of you worked very well together.

Kellogg: Oh, we did! We all hitched about certain things that seemed a little crazy to us at the time. But when it was finally done and we all got together and talked, we were really surprised by how well the Avanti came out.

I remember shaking hands with Loewy when we were all finished and saying our goodbyes. He said, "Tom, it was really enjoyable working with you, but I hope that when the car comes out, you're not going to tell people that you designed it and I had nothing to do with it." I said, "No, I'm going to tell it just the way it was. It was your concept we evolved." And he said, "Oh, good!"