The Success of the Studebaker Avanti 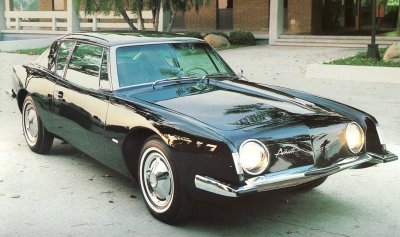 S-P President Sherwood Egbert was happy with the Studebaker Avanti, even though sales were slow at first.

There were scarcely any Studebaker Avantis to show anyone in the fall of 1962. The reason was unexpected quality problems with the fiberglass bodies, which initially were supplied by Molded Fiberglass Company of Ashtabula, Ohio, the same firm that made Corvette shells for Chevrolet.

The problems were severe enough to cause lengthy production delays, so the Avanti didn't reach dealers in quantity until well after announcement day. This not only diluted the car's impact, but cost Studebaker a number of sales. A stunning new 1963 Corvette didn't help.

Nevertheless, Egbert was pleased with his new car, and he soon asked Loewy for an entire line of Avanti-inspired standard Studebakers as possible 1964 models. This time, Andrews and Kellogg worked out of Loewy's New York office, drawing up an Avanti-themed convertible, four-door sedan, and four-door wagon in just seven weeks.

Ebstein then flew to Paris to oversee construction of two running metal prototypes at Pichon et Parat, the coach-builder that had crafted the body for Loewy's personal BMW Both prototypes, a notch-back and a fastback, had two doors -- on one side and one door on the other, this to show body style permutations.

The prototypes were shipped to South Bend and driven on Studebaker's test track, but Egbert felt that neither proposal looked quite right. Accordingly, Loewy brought Kellogg to South Bend to supervise revisions to full-size clays of the sedan and wagon, a job Kellogg finished within a mere five days. This ultimately led to an unmounted fiberglass sedan body, again a "three-door."

But by that point, Studebaker had no money to go ahead with any of this, so the "Avanti II" program was scrapped in 1963 as the company continued to suffer falling car sales and mounting losses in the face of fast-withering public confidence.

"It kind of dragged out," Kellogg said of the passenger-car project, "but nothing happened. Loewy had me go in there a couple of times just to talk with Egbert and see if there was anything we could do to keep it going. He said, 'Boy, I'd love to keep it going even more than you guys.' But finally they closed down and moved out."

Tragically, Egbert's health began failing along with Studebaker's financial condition, and he resigned in 1963 due to inoperable cancer.

That December, Studebaker shuttered its historic South Bend factory ended production of both the Avanti and the Hawk, and retreated to building "common sense" sedans and wagons at its Canadian plant in Hamilton, Ontario. (Avanti production came to 4,643 units, including just 809 that were considered 1964 models.)

Studebaker built its last cars in 1966, at least until its revival many years later. Egbert died three years later at the age of only 49, but Raymond Loewy lived all the way until 1986.

To read an interview with Avanti-designer Tom Kellogg about his thoughts on the Stubaker Avanti, go on to the next page.