The Development of the Studebaker Avanti 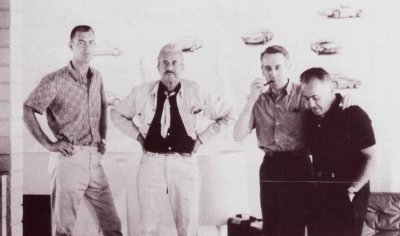 Loewy immediately flew to his home in Palm Springs and asked Ebstein to join him in designing the Studebaker Avanti. "When we got there," as Ebstein later recalled, "Mr. Loewy told me he had just hired a young student out of the Art Center by the name of Tom Kellogg.

"He was very impressed with Kellogg, [but] he asked me who else to get. I suggested Bob Andrews, who'd been in and out of the Loewy organization so many times before. We all got together in Palm Springs, and Loewy leased a house there. We didn't want to do the work in his private home."

It apparently wasn't hard for Loewy to put together the team. Most of the designers employed by him liked their boss and enjoyed working for him. In fact, many of those from the Studebaker days have volunteered that Loewy was the best boss they'd ever had. That may be because he made it a point to ask, "What do you think?" He certainly wasn't dictatorial, yet his designers eagerly did what he asked.

The now-deceased Andrews, who was instrumental in shaping the 1948 Hudson and worked on a number of Loewy projects, remembered him as a good motivator.

As Andrews said in a 1985 interview, "The best compliment I can give Mr. Loewy is that he was such a fine director that when you worked with him, it was the most important project in the world. I felt just great about it and did some of my best work for him."

Kellogg said that he was sleeping late one morning when Loewy phoned, asking whether he might be interested in helping design a "new sport car" for Studebaker. "In my haze, all I could say was yes!"

On Monday: March 20, Loewy, Kellogg, Ebstein, and Andrews settled into the leased house on the outskirts of Palm Springs. Kellogg noticed that Loewy had taped to one wall a picture of the 1961 Lincoln Continental. Loewy said he liked that car's thin-bladed fenders.

The Loewy team took time out on a breezy spring day to pose with the first clay model of the Avanti.

He also had a picture of an E-Type Jaguar, plus a rough sketch, which he had himself done, showing a pinched, "Coke bottle" body shape in plan view. "And this is what we went by," said Ebstein. "We sat and drew. Bob Andrews started a little clay model, and Tom Kellogg made beautiful sketches."

Loewy also posted rough drawings of "hard points," the crucial dimensions for the new car. Kellogg requested that Loewy add photos of the personal coupes he had built on Lancia, Jaguar, and BMW chassis. Then, as Kellogg recalled, "Loewy explained about Egbert, what kind of person he was: a California guy, real aggressive, young with lots of energy, a pilot."

See the next page to find out how the Studebaker Avanti moved from a prototype to a reality.